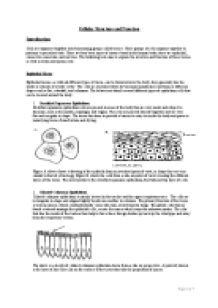 ﻿Cellular Structure and Function Introduction Cells are organised together into functioning groups called tissues. These groups of cells organise together to perform a specialised task. There are four basic types of tissues found in the human body; these are epithelial, connective, muscular, and nervous. The following text aims to explain the structure and function of these tissues as well as ovum and sperm cells. Epithelial Tissue Epithelial tissues, as with all different types of tissue, can be found all over the body, they generally line the inside or outside of a body cavity. The cells are anchored down by basement membranes and form in different shapes such a flat, cuboidal, and columnar. The below text details several different types of epithelium cells that can be located around the body. 1. Stratified Squamous Epithelium Stratified squamous epithelium cells are present in areas of the body that are very moist and subject to abrasion, such as the mouth, esophagus and v****a. The cells are packed densely together and are very flat and irregular in shape. The tissue functions to provide a barrier to entry to inside the body and protects underlying tissues from friction and drying. Figure A. above shows a drawing of the epithelia from an overhead point of view, in shape they are very similar to that of a fried egg. ...read more.

They continuously contract, involuntarily to pump blood around the body from the heart. The large presence of mitochondria in the fibres make the muscle highly resistant to fatigue allowing the heart to constantly function. The cardiac fibres feature a nucleus in the centre of each fibre. The fibres are tube/ cylinder shapes that branch and attach on to other cardiac fibres. This branching and bonding creates a network of interconnected fibres which form strong muscle tissue that will be able to contract in sync. Connective tissue Connective tissues generally serve to connect bone to bone, bone to muscle, and muscle to muscle. However blood cells are also recognised as a connective tissue as they connect the body systems together by circulating oxygen, nutrients, and proteins. 1. Bone Cell (Osteocytes) An osteocyte is a mature bone cell. The cells can sense pressures and cracks in the bone caused by muscular activity. They help direct other types of bone cells to where the bone needs to be dissolved. This on-going remodelling helps the bone as an organ adapt to the body?s mechanical needs. As pointed out in the picture above, the cells connect to one another through narrow channels in the bone known as canaliculi. The canaliculi are also used for the transport of nutrients and waste. ...read more.

The cell body contains the nucleus and other components that maintain the function of the cell. Sperm Cell Sperm is a male cell used for reproduction. In human reproduction the sperm is transferred to the female ovum via s****l intercourse where it fuses with, and fertilises the egg. Sperm cells are the smallest human cells. The head of the sperm (labelled A. in the above drawing) is used to penetrate the ovum. Inside the head is where the nucleus can be found. The nucleus carries hereditary information of the male in the form chromosomes and DNA. Part B. of the above is the mid piece/ energy store of the sperm. This contains mitochondria which helps the sperm to survive on its journey to the female egg. Part C. represents the tail which propels the sperm at speed to reach the egg. Ovum Cell The ovum is a female reproductive cell. Its function is to provide half the genetic material required for reproduction. In order to fertilise it needs male sperm. The perfectly round ovum cell is the largest human cell and is visible to the naked eye; this makes it easy for the sperm to get to it. The cell mainly consists of cytoplasm in which it uses to survive whilst waiting for the sperm. The nucleus is not visible until conception. The membrane of the ovum allows only one male sperm to enter for fertilisation. ...read more.

A very comprehensive and detailed piece of work on cells. The function and structure of all the major cell types are described and explained along with a simple diagram to reinforce the description. 5 stars