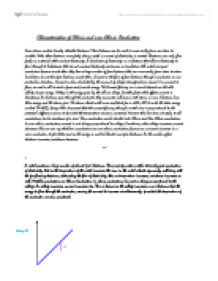 Characteristics of Ohmic and non-Ohmic Conductors.

Characteristics of Ohmic and non-Ohmic Conductors

Some atoms contain loosely attached electrons. These electrons can be made to move easily from one atom to another. When these electrons move freely along a path, a current of electricity is created. Electrons can only flow freely in materials that conduct electricity. A Conductor of electricity is a substance that allows electricity to flow through it. Substances that do not conduct electricity are knows as Insulators. All metals are good conductors because inside them they have a large number of free electrons that can move easily from atom to atom. Insulators do not have free electrons inside them. Current is the flow of free electrons through a conductor in one particular direction. Current is also calculated by the amount of charges transferred per second. For current to flow, we need a cell to exert a force and provide energy. The Current flowing in a circuit depends on the cells ability to give energy. Voltage is the energy given by the cell per charge. Another factor that affects current is Resistance. As electrons pass through the conductor they encounter collisions with atoms or ions. Electrons lose their energy and the atoms gain. The atoms vibrate with more amplitude for a while, till it emits the extra energy as heat. The 1862, George Ohm discovered that the current flowing through a metal wire is proportional to the potential difference across it (provided the temperature remains constant). However this law does not apply to all conductors, due to resistance of a wire. Thus, conductors can be divided into Ohmic and Non-Ohmic conductors. In non-ohmic conductors current is not always proportional to voltage. Sometimes, when voltage increases current decreases.

In this section, I am going to analyze my results and draw a conclusion. From the results, I can see that Current increases with Voltage for all the graphs. But the way in which it increases is different.

Any difference in reading may be due to some error, which I will account for in evaluation.

An LDR is a special type of resistor, which changes its resistance based on the amount light falling on it. A photoresistor is made of a high resistance semiconductor. If light falling on the device is of high enough frequency, photons absorbed by the semiconductor give bound electrons enough energy to jump into the conduction band. The resulting free electron (and its hole partner) conduct electricity, thereby lowering resistance. LDRs are used in electronic circuits to operate light-sensitive switches.

For this experiment, we will need:

The Apparatus will be set up as shown below:

The results I expect, are shown below:

I will first set the Variable Resistor as at its maximum value. The variable resistor will be used to supply varying voltage to the filament lamp. Then I shall take down the readings of Voltage of the LDR at different voltages at intervals of 0.2 Vof the filament lamp.  I will take down at least 10 sets of values to investigate the varying current according to the voltage to find out the resistance in an LDR. I will take down the results in a table like the one below.

The experiment will then be repeated, and the current will be taken, at intervals of 0.2 V, in ascending order so as to avoid errors and obtain reliable results.

Thus, from my experiments, I have found: