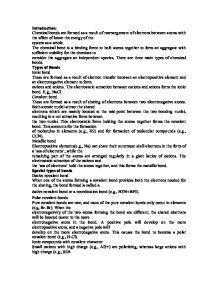 Chemical Bonding and CFCs. There are three main types of chemical bonds.

Introduction: Chemical bonds are formed as a result of rearrangement of electrons between atoms with the effect of lower the energy of the system as a whole. The chemical bond is a binding force to hold atoms together to form an aggregate with sufficient stability for the chemists to consider the aggregate an independent species. There are three main types of chemical bonds. Types of Bonds Ionic bond These are formed as a result of electron transfer between an electropositive element and an electronegative element to form cations and anions. The electrostatic attraction between cations and anions form the ionic bond. E.g., NaCl. Covalent bond These are formed as a result of sharing of electrons between two electronegative atoms. Both atomic nuclei attract the shared electrons which are mainly located at the mid-point between the two bonding nuclei, resulting in a net attractive force between the two nuclei. This electrostatic force holding the atoms together forms the covalent bond. This accounts for the formation of molecules in elements (e.g., H2) and for formation of molecular compounds (e.g., CCl4). Metallic bond Electropositive elements(e.g., Na) can share their outermost shell electrons in the form of a 'sea of electrons', while the remaining part of the atoms are arranged regularly in a giant lattice of cations. ...read more.

These are hard solids with high melting points. Graphite is an example of a giant covalent structure with a high melting point but a low tensile strength, as it only forms 2-dimensional sheets in the giant structure. Metallic giant structures Mobile electrons account for the electrical and thermal conductivity of metals in both solid and liquid states. The giant structure accounts for the facts that most metals are solids at room temperature. The metallic bond is not broken when the metal ions rearrange their positions in the crystal, so metals can change shape without breaking (malleable and ductile). Hybridization in covalent compounds Before covalent bonds are formed, the s, p and even d orbitals can hybridize to form a number of equivalent orbitals to hold bonding electron pairs or lone electron pairs. This can be used for understanding the shapes of molecules and explaining delocalization of electrons in covalent compounds. Introduction: CFCs, or chlorofluorocarbons, are a class of organic compounds containing nly the elements carbon, chlorine and fluorine. These are a class of very stable and volatile organic liquids with a wide range of uses. Examples of CFCs include: CFCl3, CF2Cl2 and CClF2CClF2. ...read more.

is fast, and has the effect of disturbing the balance in the production and destruction of ozone. What worries environmentalists more is the fact that since the reactive species Cl � consumed in (4) is actually regenerated in (5), the presence of one Cl � can effectively destroy many ozone molecules. Ozone depletion leads to reduced crop yield, and higher incidence of skin cancer and eye cataract. There is therefore an urgent need to minimize the use of CFCs and to develop suitable CFC substitutes which do not adversely affect the environment. Possible alternatives for chlorofluorocarbons Attempts have been made to develop compounds which have low ozone depletion potential (ODP) to replace CFCs as refrigerants, aerosol propellants and solvents. Possible alternatives for CFCs include: � Hydrochlorofluorocarbons (HCFCs) such as CF3CHC12 They break down more quickly in the atmosphere. � Hydrofluorocarbons (HCFs) such as CF3CH2F They have no chlorine and thus are "ozone safe". However, safety question on toxicity is still unsolved. � Hydrocarbons such as butane and propane They are cheap and readily available. As they contain no chlorine, they are "ozone safe". Water and steam They are effective for some cleaning applications and thus can replace some CFCs as solvents in cleaning. UV light UV light UV light ...read more.

This is a good summary of the types of bonding exhibited by molecules, with a fairly thorough talk about CFC's at the end. It is detailed and contains advanced descriptions of AS level work. This piece lacks diagrams, which would have made understanding some of the topics covered much easier