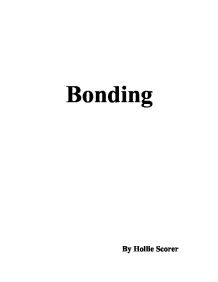 Bonding By Hollie Scorer Ionic Bond An ionic bond is the electrostatic attraction that forms between oppositely charged ions. Ionic compounds are electrically neutral, it is held together by the attraction between the opposite charges of cations and anions. There are various types of ionic bonds that can be formed by the transfer of electrons an example of this is calcium chloride. In this compound calcium has two electrons on its outer shell, the chlorine atom has seven outer electrons. If the calcium atom transfers two electrons, one to each chlorine solution it becomes a Ca2+ ion with the stable configuration of an inert gas in this case its argon. At the same time each chlorine, having gained one electron becomes a Cl� ion, also with an inert gas configuration. Calcium chloride, CaCl2 www.bbc.co.uk/.../img/gcsechem_102.gif Ionic bonds are formed between metal atoms which lose electrons the reason for this is the low first ionization energy metals have. ...read more.

In water the hydrogen-oxygen covalent bond is very polar. As hydrogen has only one electron when the water pulls the bonded pair of electrons towards itself, it leaves the hydrogen atom's nucleus of a single proton more exposed. The resulting ?+ on the hydrogen atom is attracted to the lone pair (?-) of the oxygen atom to form a fairly strong intermolecular attraction. Metallic bonding In metals, the metal atoms lose their outer electrons to form metal cations. The electrons from all the metal atoms form a sea like structure of electrons that can flow around these metal cations. These electrons can be described as delocalised electrons. As the metal cations and the electrons are oppositely charged, they will be attracted to each other, and also to other metal cations. These electrostatic forces are called metallic bonds, and these are what hold the particles together in metals. Since the metal ions in metallic bonds are closely packed together, it is not surprising that most metals have high densities such as stainless steel. ...read more.

The candidate gives a detailed response to the set topic, though they have failed to write an introduction. It is essential that you introduce your work, this gives you a chance to engage the reader, you should state what you ...

The candidate gives a detailed response to the set topic, though they have failed to write an introduction. It is essential that you introduce your work, this gives you a chance to engage the reader, you should state what you plan to discuss and define or describe your set topic. In this case a suitable introduction should state what chemical bonding is and the different types of bonds present.

The candidate gives a good account of the different type of chemical bonding and includes intermolecular forces, which are equally important. However they haven’t mentioned co-ordinate bonding in which one atom or molecule provides both of the electrons for a covalent bond, I would expect an A-level candidate to know this. That said the detail provided is accurate and the candidate has used images to help demonstrate the different types of bonds, this is a nice touch and makes an essay more interesting and sometimes easier to understand. Another plus, is that the candidate listed the resources they have used and provided links to webpages. Unfortunately the candidate's essay comes to a stop without any type of conclusion. You should always make an effort to draw your essay to a close, a good conclusion contains a summary of your key points and links back to your introduction as this helps provide a sense of closure.

The candidate shows a good understanding of this topic and uses scientific terms accurately, in addition to this the essay is set out in a clear format and is coherent. Furthermore there are no punctuation, spelling or grammatical errors.