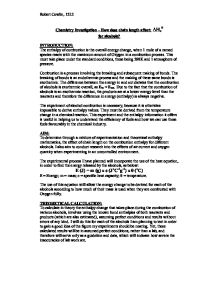 Chemistry Investigation - How does chain length affect: &amp;#8710;Hc&amp;egrave; for alcohols?

Chemistry Investigation - How does chain length affect: ?Hc? for alcohols? INTRODUCTION: The enthalpy of combustion is the overall energy change, when 1 mole of a named species reacts with the maximum amount of Oxygen in a combustion process. This must take place under the standard conditions, these being 298K and 1 atmosphere of pressure. Combustion is a process involving the breaking and subsequent making of bonds. The breaking of bonds is an endothermic process and the making of these same bonds is exothermic. The difference between the energy in and out dictates that the combustion of alcohols is exothermic overall, as Ein < Eout. Due to the fact that the combustion of alcohols is an exothermic reaction, the products are at a lower energy level than the reactants and therefore the difference in energy (enthalpy) is always negative. The experiment of alcohol combustion is necessary, because it is otherwise impossible to derive enthalpy values. They must be derived from the temperature change in a chemical reaction. This experiment and the enthalpy information it offers is useful in helping us to understand the efficiency of fuels and how we can use these fuels favourably in the chemical industry. AIM: To determine through a mixture of experimentation and theoretical enthalpy mathematics, the effect of chain length on the combustion enthalpy for different alcohols. I also aim to conduct research into the effects of air current and oxygen quantity when experimenting in an uncontrolled environment. The experimental process I have planned will incorporate the use of the heat equation, in order to find the energy released by the alcohols, as below: E (J) = m (g) x c (J�C-1g-1) x ? (�C) E = Energy; m = mass; c = specific heat capacity; ? = temperature. The use of this equation will allow the energy change to be derived for each of the alcohols according to how much of their mass is used when they are combusted with Oxygen fully. ...read more.

* The green highlight for Butanol start mass at attempt 4 was due to a large decrease from the previous end mass, which could have been due to faulty equipment. However, it was accounted for, due to a lid being left off of the spirit burner. Due to the volatility of alcohols, this mass was a realistic loss. * The blue highlighted figure was anomalous due to the fact that for that single reading, I employed a strategy of double-draught proofing, but then realised this would be unrepeatable, due to the lack of equipment. Therefore, this is the only result to employ such measures. In reference to Appendix D: * Point A The plotting of the Ethanol enthalpy, shows the greatest deviation from the best fit curve. Yet, statistically, ethanol has the second most reliable results for used masses, with only one fairly minor anomaly. This may indicate that the curve is drawn to accommodate the three more deviant fuel enthalpies rather than those that should lie nearer the curve. * Similarly point B represents Propanol, which did not have a single used mass figure deviating + or -25% from the average, yet it deviates largely from the best fit curve. This is proof that the curve is in fact incorrectly drawn, as it fails to account for the anomalies of the results table (Figure 1). * What can be conceived as a more viable curve (taking into account the anomalies of Figure 1) is drawn on the same axes and labelled Z. INVESTIGATION: In reference to the question I was asked to answer, I believe that both my procedures, as well as my research and evaluative methods have proven what I aimed to, and also provided me with information to benefit future similar investigations. I have been able to prove and disprove my various predictions and state with more precision the actual impact of various factors on my final results. Therefore I can evaluate my effort as well-informed and productive in finding a viable conclusion based on statistical and chemical evidence. ...read more.