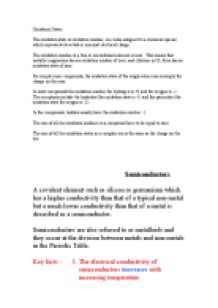 Semiconductors are also referred to as metalloids and they occur at the division between metals and non-metals in the Periodic Table. Key facts : 1. The electrical conductivity of semiconductors increases with increasing temperature. 2: Doping pure crystals of silicon or germanium with certain other elements produces 2 types of semiconductors: n- type and p-type semiconductors. The addition of small quantities of certain substances to pure silicon greatly enhance its conductivity and makes possible the construction of electronic devices. This controlled addition of impurities is called ?doping?. 1. doping pure silicon with phosphorus or arsenic (group 5 elements) these elements have 5 valence electrons, a few of the silicon atoms are replaced by P, As atoms --- 1 electron is left over after the 4 bonds have been formed. ...read more.