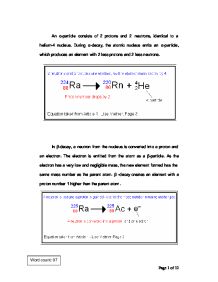 An ?-particle consists of 2 protons and 2 neutrons, identical to a helium-4 nucleus. During ?-decay, the atomic nucleus emits an ?-particle, which produces an element with 2 less protons and 2 less neutrons. In �-decay, a neutron from the nucleus is converted into a proton and an electron. The electron is emitted from the atom as a �-particle. As the electron has a very low and negligible mass, the new element formed has the same mass number as the parent atom. � -decay creates an element with a proton number 1 higher than the parent atom. Nuclear fission reactions involve an atom absorbing an initial slow moving neutron, leading to the atom splitting into 2 different elements. The products formed are therefore dependable on the way in which the atom is split. This process differs from radioactive decay; which requires no initial energy input and produces a single new element, differing chemically from the parent atom by the subatomic particles emitted in the ? or �-particle emission. Hydrogen and Helium are the two lightest elements in the periodic table. ...read more.

"If an atom of Uranium-235 is given sufficient energy through the absorption of one neutron, it enters an excited state and beings to oscillate. When the oscillations become unstable, the nucleus splits into two similar nuclei of medium mass, emitting more neutrons in the process." The neutrons emitted from the nucleus can cause further emissions in other nuclei, producing a chain reaction. To control nuclear fission reactions, the nuclear reactor contains a graphite moderator and control rods, made from a boron-coated steel. The graphite moderator slows down the fast moving neutrons so they can undergo nuclear fission. The control rods are able to absorb neutrons. When the rods are pushed entirely into the nuclear reactor, they absorb all the neutrons present, meaning no nuclear fission reactions can be initiated and all reactions stop. When the control rods are moved partly in and out of the reactor, they can control the rate at which fission reactions occur. Nuclear reactors are also controlled with the presence of Uranium-238, which does not undergo fission in the reactor and absorbs neutrons, interrupting the chain reaction. ...read more.

The byproducts of nuclear fission are radioactive and remain so for significant amounts of time, for example Plutonium-239, which has a half-life of 24,110 years. For fusion reactions to happen, the particles must form a hot ionised gas called plasma. Once the temperature is high enough, a plasma of positive ions in a sea of delocalised electrons is created. On earth, this is very difficult to create as it requires extremely high temperatures. In a fusion power station, the hot plasma is contained within a tokamak container made from carbon fibre. The plasma comes into contact with the walls at the bottom of this container to pump away excess helium ions. However, this causes the carbon tiles to be eroded by deuterium or tritium ions and neutral species, causing the formation of hydrocarbons, 1 - 3 carbon atoms in length. As these hydrocarbons are bombarded with protons, they form reactive radicals which combine to form hydrocarbon films. This causes problems for the reaction as they trap tritium and deuterium ions, stopping their circulation in the plasma and preventing energy production. Also, if the film gets thicker it will flake and form dust particles, which reduces the purity and performance of the plasma. ?? ?? ?? ?? Page 1 of 12 ...read more.