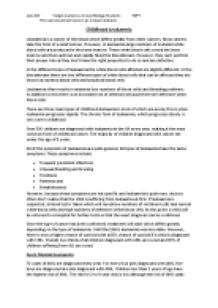 ﻿Jane Gill Target Audience: A level Biology Students 9DPT This text would be found in an A level textbook Childhood Leukaemia Leukaemia is a cancer of the blood which differs greatly from other cancers. Most cancers take the form of a solid tumour. However, in leukaemia large numbers of mutated white blood cells are produced in the bone marrow. These white blood cells crowd the bone marrow and then spill out and rapidly flood the bloodstream. However, they can?t perform their proper role as they don?t have the right properties to do so and are defective. In the different types of leukaemia the white blood cells affected are slightly different. In the bloodstream there are two different types of white blood cells that can be affected they are known as myeloid blood cells and lymphoid blood cells. Leukaemia often results in anaemia (low numbers of blood cells) and bleeding problems. In addition to this there is an increased risk of infection because there are defective white blood cells. There are three main types of childhood leukaemia?s most of which are acute; this is when leukaemia progresses rapidly. The chronic form of leukaemia, which progresses slowly, is very rare in childhood. Over 500 children are diagnosed with leukaemia in the UK every year, making it the most common form of childhood cancer. ...read more.

8. M7 Acute Megakaryoblastic Leukaemia (A form of AML which mainly affects the Megakaryoblastic immature dividing cells [immature dividing cells are also known as blast cells] which are another type of myeloid cell) Treatment for AML Children are admitted to hospital for around 6 months which is the amount of time it takes to treat AML. The intensive treatment often makes children unwell and they often need a high level of supportive care. The main treatment is chemotherapy, a combination of chemotherapy drugs and steroids are given as part of a treatment plan. Some children also require radiotherapy or a bone marrow transplant, for which they need to find a donor with the same blood group. There are 2 phases for the treatment- remission induction (when the child is kept in special conditions and undergoes therapy) and post-remission treatment (when the child is kept in hospital and checks are made to see that the child is fully recovered) Chronic Myeloid Leukaemia Less than 15 new cases of CML are diagnosed in the UK every year and most of these cases are in children in the late teens. CML is exceptionally rare at any age and is most commonly found in adults with less than 5% of the total of all leukaemias are Chronic Myeloid Leukaemia (CML) ...read more.

Treatment When the diagnosis of ALL is confirmed, the child will be referred immediately to one of the UK?s 21 specialist centres for treatment. The aim of the treatment is to rid the body of leukaemic cells and to restore normal blood cell production. The principal treatment is chemotherapy. Some children may require radiotherapy or bone marrow transplants. The duration of the treatment for ALL is 2 years for girls and boys require 1 additional year as they have been shown to have a greater risk of a relapse. The child would spend the first part of their treatment in hospital but most of their later treatment will often be carried out on a ?shared care? basis between the specialist centre and the local hospital. Glossary Chemotherapy: the treatment of disease by the use of chemical substances. Gleevec: a drug used for the treatment of CML. Maturation: the process in which a cell becomes fully developed. Myeloid Cells: white blood cells that are not Lymphoid Cells. Lymphoid Cells: cells that produce immunity. Philadelphia Chromosome: a chromosome abnormality in CML. Precursor: something that suggests something to come. Radiotherapy: the treatment of disease by exposure to a radioactive substance. Sprycel: a drug used to treat AML and CML. Steroids: Any of a large class of organic compounds with a characteristic molecular structure containing four rings of carbon atoms. Tasigna: a drug used to treat CML when there is a Philadelphia Chromosome. ...read more.