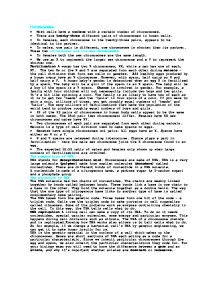 Chromosomes * Most cells have a nucleus with a certain number of chromosomes. * There are twenty-three different pairs of chromosomes in human cells. * In females, each chromosome in the twenty-three pairs, appears to be identical to its partner. * In males, one pair is different, one chromosome is shorter than its partner. These two chromosomes are the s*x chromosomes. * In females both the s*x chromosomes are the same length. * We use an X to represent the longer s*x chromosome and a Y to represent the shorter one. Fertilisation A woman has two X chromosomes, XX, while a man has one of each, XY. The two Xs or the X and Y are separated from each other during meiosis - the cell divisions that form s*x cells or gametes. All healthy eggs produced by a human ovary have an X chromosome. However, with sperm, half carry an X and half carry a Y. A human baby's gender is determined when an egg X is fertilised by a sperm. The baby will be a girl if the sperm is an X sperm. The baby will be a boy if the sperm is a Y sperm. Chance is involved in gender. For example, a family with four children will not necessarily include two boys and two girls. It's a bit like spinning a coin. The family is as likely to have two of each as it is to get two 'heads' and two 'tails' in four spins of a coin. If you were to spin a coin, millions of times, you get roughly equal numbers of 'heads' and 'tails'. The many millions of fertilisations that made the population of the world tend to produce roughly equal numbers of boys and girls. * 22 of the 23 pairs of chromosomes in human body cells appear to be the same in both sexes. The 23rd pair (s*x chromosomes) ...read more.

it can be found in several very different forms. These can include diamond and graphite, but carbon can combine with other atoms to form a wide variety of molecules. Some of these have names which suggest that they contain carbon, for example: carbon dioxide (CO2), or carbohydrates (such as starch and sugar). The names of other molecules, such as proteins and fats, don't give you this clue so you'll need to remember them. It's important to remember that all living things contain a lot of carbon in one form or another because all cells contain proteins, fats and carbohydrates. All the cells in plants have a cell wall around them. This is made of cellulose, a carbohydrate. Where does the carbon come from? Animals get their carbon from the foods they eat (which contain carbohydrates, fats and proteins). These nutrients are broken down (digested) into smaller molecules containing carbon, which can be used by the body to: make new cells make materials, such as hair, in mammals make energy. These molecules are burned up in a process called respiration, in which CO2 (carbon dioxide) is produced and exhaled out. feed plants. Green plants get their carbon from the carbon dioxide in the air. This enters the leaves and is used up by the plant during the process of photosynthesis. During this process sugar is produced, which contains carbon. What happens to the carbon in animal droppings and in dead animals and plants? Several things could happen: The dead animals and plants could be eaten by other animals called scavengers, for example, crows. The remains could be digested by decomposers, for example, microbes such as fungi or bacteria. They could become fossilised to form coal, oil or gas. What is the carbon cycle? You may have noticed that there is a sort of 'recycling' going on here. The way in which carbon is 'recycled' in the environment is called the carbon cycle.Make sure you understand what is happening in respiration and photosynthesis, in particular which gas is used up and which gas is released in each process. ...read more.

Diffusion Particles in liquids and gases have kinetic energy. They move about, at speed, in all directions. The particles move about randomly. In an area of high concentration, some of the particles collide with each other, lose energy and slow down. Others will escape from the concentrated area to places where there are fewer or none. Very few particles leave an area of low concentration to go to an area where the concentration is higher. This creates a diffusion gradient - the result is that particles diffuse from an area of high concentration to an area of low concentration. Osmosis Some membranes in plant and animal cells allow certain particles to pass through them and not others. They are partially (or selectively) permeable. The diffusion of water through a partially permeable membrane is called osmosis. The rate at which osmosis takes place is affected by the concentration of water in the two solutions on each side of the membrane. If a partially permeable membrane separates the two solutions, water moves through it in both directions at the same time. However, more water leaves a dilute solution (high water concentration) and passes into a more concentrated solution (low water concentration) than enters it. Although the water appears to move across the membrane in one direction, it is in fact moving in both directions but more one way than the other. When the concentration of water is the same on both sides of the membrane, the movement of water will be the same in both directions. At this point, the net exchange of water is zero and the system is in equilibrium. PlaceParticles moveFromToGutDigested food productsGut cavityBlood in capillary of villusLeafOxygenChloroplastAir spaces in mesophyllLungsOxygenAlveolar air spaceBlood circulating around the lungsParticles continue to move from high to low concentration for as long as there is a concentration gradient. For example, the blood constantly removes oxygen from alveolar air spaces in the lungs, provided that there is more oxygen in the alveolar air spaces than in the blood. The circulation takes the oxygen-rich blood away and replaces it with blood low in oxygen. ...read more.