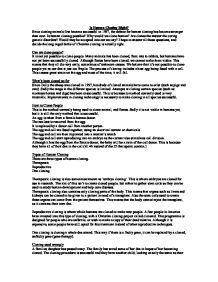 Is Human Cloning Right? Since cloning animals first became successful in 1997, the debate for human cloning has become stronger than ever. Is human cloning possible? Why would we clone human? Are clones the answer the curing genetic disorders? Would they be accepted into our society? I hope to answer all these questions, and decide the long raged battle of if human cloning is actually right. Can we clone people? It is not yet possible to clone people. Many animals has been cloned, from rats to rabbits, but humans have not yet been successfully cloned. Although foetus have been cloned, we cannot make them viable. This means that they all die very early, sometimes of unknown causes. We believe that it's not possible to clone people yet as our dna is just too fragile. The process of cloning includes a host egg being fused with a cell. This causes great strain on the egg and most of the time, it will fail. ...read more.

Although it has the egg from the female donor, the baby will be a twin of the cell donor. This is because they have all of their dna in the cell (all 46 instead of the 23 that sperm contain.) Types of Human Cloning There are three types of human cloning. Therapeutic Reproductive Dna cloning Therapeutic cloning is also sometimes known as 'embryo cloning'. This is where embryos are cloned for use in research. The aim of this isn't to create cloned people, but rather to gather stem cells so they can be used to study human development and help cure diseases. Therapeutic cloning also contains only cloning parts of the body. This means that organs such as livers and kidneys can be cloned to be given to a patient in need of a transplant. Also the stem cells used to create these organs can come from the patient themselves. This means that the body cannot reject the transplant, as it contains their own dna. ...read more.

Good example of cloning A couple are infertile and wants children. The decide that they want a child who is genetically related to both of them. They undergo the cloning procedure and successfully have a child between them. Although all the child's dna will match the fathers donor cell, the child will still be part of both the parents, as it grew in the mothers womb. What society thinks of cloning In feb 2001, time magazine found that; 90% felt that human cloning was a bad idea 67% felt that animal cloning was a bad idea 69% felt that human cloning would be against gods will And yet 45% believe human cloning would be possible within the next 10 years. There is a lot of controversy over the issue of if we clone humans or not. Richard Nicholson of the British Bulletin of Medical Ethics , believes that cloning research will be 'sowing the seeds of our destruction' While Ann Northrop, a columnist for LGNY, believes that 'this cloning has the potential of giving women complete control over reproduction... a stunning possibility that could, carried to its logical extreme, eliminate men altogether'. ...read more.