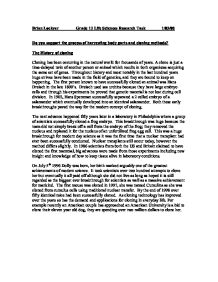 Cloning - The assualt on the sanctity of life

Brian Lockyer Grade 12 Life Sciences Research Task 1/03/08 Do you support the process of harvesting body parts and cloning methods? The History of cloning Cloning has been occurring in the natural world for thousands of years. A clone is just a time-delayed twin of another person or animal which results in both organisms acquiring the same set of genes. Throughout history and most notably in the last hundred years huge strives have been made in the field of genetics, and they are bound to keep on happening. The first person known to have successfully cloned an animal was Hans Dreisch in the late 1800's. Dreisch used sea urchins because they have large embryo cells and through his experiments he proved that genetic material is not lost during cell division. In 1902, Hans Spemman successfully separated a 2 celled embryo of a salamander which eventually developed into an identical salamander. Both these early breakthroughs paved the way for the modern concept of cloning. The next advance happened fifty years later in a laboratory in Philadelphia where a group of scientists successfully cloned a frog embryo. This breakthrough was huge because the team did not simply break off a cell from the embryo of the frog; they removed the nucleus and replaced it for the nucleus of an unfertilized frog egg cell. This was a huge breakthrough for modern day science as it was the first time that a nuclear transplant had ever been successfully conducted. ...read more.

Other issues that are highlighted include the social issues that cloned children may face as well as the destruction of human embryos. How does one become an organ donor and what are the legal requirements In order to become an organ donor the first step is to register. In South Africa an organ donor card will be sent to you once you register with the Organ Donor Foundation. Along with the card, stickers are also sent that should be stuck on your driver's license and ID book. If you are involved in an accident and are certified brain dead, a transplant co-coordinator has to approach your next-of-kin and ask permission to harvest your organs, it is law in South Africa that the next-of-kin must give permission. It is therefore vital that if you want to become a donor you must discuss your intentions with your family and make sure that they understand and accept your decision. To protect the person receiving the organ, many health and safety tests are conducted. It is a primary concern that the organ not be infected or damaged in any way as this could jeopardize the life of the recipient. Safety and health regulations vary from country to country but generally organs from people with a history of cancer are not accepted as well as organs from people who have infectious diseases or bacterial or fungal infections at the time of death. Such people may donate their organs and tissues for laboratory research or education. ...read more.

What kind of society do we live in that allows a certain few people the opportunity to choose and alter the course of life? How can we harvest life just to destroy it? This is exactly the problem that the world is facing with cloning. I struggle to understand how people think that therapeutic cloning is beneficial as it saves lives, when it actually is the murder of another human being. Cloning is a direct violation of human rights, all humans have the right to life and physical integrity, however, the cloning technique involves manipulation, selection and elimination of human embryos. It is vital that all humans be respected throughout life even in the embryonic phase. But the manipulation of human embryos during the process of cloning is a clear violation of the sanctity of life. The prospect of human cloning represents an infringement of two more fundamental human rights; the principle of equality among human beings and the principle of non-discrimination. In human cloning we bear witness to man's apparent dominance over man which is an infringement of the principle of equality among all human beings. In the process of cloning we also witness the selection and manipulation of certain embryos which is an example of discrimination. It is safe to say that human cloning does not seem to promise any great benefits neither does it seem to meet any great human needs. Both forms of cloning involve practices that are morally wrong as well as offensive and one really has to think if the end really does justify the mean. ...read more.