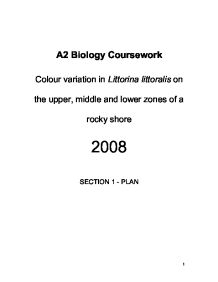 Colour variation in Littorina littoralis on the upper, middle and lower zones of a rocky shore

A2 Biology Coursework Colour variation in Littorina littoralis on the upper, middle and lower zones of a rocky shore 2008 SECTION 1 - PLAN Introduction In this investigation, I will be looking at the abundance of different colours of Littorina littoralis and their distribution over the upper, middle and lower zones of a rocky shore. Figure 1 shows a typical yellow-shelled Littorina littoralis. . The Littorina littoralis are more commonly known as the 'flat' periwinkle, due to their shell's flattened spire. They are common to all British and Irish shores where brown seaweeds are found [1]. Its shell is variable in colour, usually appearing olive-green, but yellow, brown, banded and criss-cross patterned varieties are also common [5]. I will collect my data from Porth Cwyfan, Wales (Grid Reference SH 338 683) on the morning and early afternoon of Thursday the 9th of October, 2008. Theory Throughout the day, tides cause the sea level to fluctuate up and down, causing the shore to be cyclically exposed to air and submerged by the sea. By doing this, varying environmental conditions are formed in one stretch of shore. Most coastal areas experience two high tides and two low tides each day, each causing the environmental conditions of the shore to change. There are many conditions which are altered by the tides. The duration of exposure to sunlight will vary along the rocky shore, with the lower zone being submerged by seawater throughout most of the day, blocking - partially or otherwise - sunlight reaching the sea floor. The upper zone of the rocky shore will be predominantly exposed to sunlight for most of the day. ...read more.

I believe this is the case because as the environment becomes drier, the Littorina littoralis will themselves dry out and die. I also predict that towards the lower zone, the darker coloured shells will be more abundant. This is because the environment is predominantly dark coloured, with a longer duration of sea cover and a thicker layer of sea weeds than that of the upper zone. This would provide better camouflage for those shell colours which can best mimic this range of colours, leading to a better resistance to predation. Similarly, as the upper zone will consist of more dry sand and some lighter coloured pebbles, I predict that it will be the lighter coloured shells like yellows and orange which best mimic these colours will more well camouflage and so predators would have more difficulty seeing these shell colours. I also predict that throughout the stretch of the rocky shore, a higher proportion of Littorina littoralis will have dark coloured shells. The majority of the rocky shore is covered in dark grey coloured rocks, and wet sand. The Littorina littoralis with shell colours of grey or black will appear more camouflaged, and so have increased protection against predation Control Variables Table 1: A table listing the control variables for this investigation Variable Justification Solution Weather Organisms respond to changes in weather. For example, warmer weather will cause increased rate of evaporation, which can cause Littorina littoralis to dry out and die. The investigation will be carried out on the same day, within roughly the space of 3 hours Tide The distribution of Littorina littoralis may be changed during each cycle of the tide. ...read more.

To overcome this, there will be more than one day in which it is possible for me to take the investigation, and using local weather forecasts, the day which has the best suited weather will be chosen. In my investigation, there will be others around me undergoing similar investigations. My actions may affect their investigation in ways that may be damaging to both their results and welfare. As this is the case, good communication between me and others will help decide the course of action. It will be planned where we as a group can and cannot walk and who will be working where. I will also take consideration for how my actions will affect others. Working on a rocky shore may mean that at times I may be isolated in collecting data. To ensure my safety, there will be supervisors making regular checks on the safety of both myself and others on the rocky shore. This investigation involves the handling of organisms. To ensure their wellbeing, they will all be unharmed and handled with care. Once I have finished with any organisms, I will return them safely to within the same 0.25m2 quadrat in which they were found. Statistical test I will be using the Chi-squared test, which aims to observe differences between comparable sets of data. The data itself is collected and grouped into classes. The 'null' hypothesis for this investigation will say that that the data is distributed randomly and has no trend. The chi-squared value is compared to a value taken from a significance table to confirm whether any deviation is through to 'chance', or whether it is statistically significant. The value taken from the significance table will be of 5%, which is a significant amount for this investigation. ...read more.