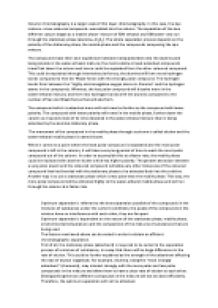 ﻿Column chromatography is a larger scale of thin layer chromatography. In this case, the dye mixture- a two coloured compound- was added into the column. The separation of the two different colours began as a mobile phase- mixture of 50% ethanol and 50%water- was run through the stationary phase (alumina- Al2O3). The whole separation process depends on the polarity of the stationary phase, the mobile phase and the compounds composing the dye mixture. The compounds have their own equilibrium between being adsorbed onto the alumina and being soluble in the water-ethanol mixture; the most soluble or least adsorbed compounds travel fast down the column and hence could be separated from the other coloured compound. This could be explained through intermolecular forces; the alumina will form more hydrogen bonds compared to Van der Waals forces with the strongly polar compound. The hydrogen bonds form between the ?highly electronegative oxygen atoms in Alumina? and the hydrogen atoms in the compounds. ...read more.

each other, they are far apart Optimum separation is dependent on the nature of the stationary phase, mobile phase, environmental temperature and the composition of the mixtures of substances that are being used. The factors mentioned above can be varied in order to obtain an efficient chromatographic separation. First of all, the stationary phase (adsorbent) is required to be suited to the separation process of a mixture of substances, in a way that there will be large differences in the rate of elution. This could be further explained as the strength of the adsorbent affecting the rate of elution negatively. For example, Alumina, being the ?most strongly adsorbent? (chemwisc), may interact strongly with the more polar and less polar compounds in the mixture and allow them to have a close rate of elution to each other. Distinguishing the two different compounds in the mixture will not be done efficiently. Therefore, the optimum separation will not be obtained. ...read more.

Additionally, if methanol was used to mix with water using a ratio of 1:1, the solvent phase will have a much greater polarity than the ethanol + water mobile phase. This is because “methanol is a stronger eluent than ethanol” (chemwisc); methanol has a stronger polarity than ethanol. The water and methanol mixture for the mobile phase may cause the compounds to move at a fast rate without being sufficiently separated. High temperatures weaken any hydrogen bonds that form between polar stationary phases and strongly polar compounds in the mixtures due to kinetic energy disrupting the connections (chemistry). Another issue is that the compounds will dissolve in the solvent at high temperatures, without being separated. However, even if the chromatography procedure was done at very low temperatures, there wouldn’t be the exact amount of energy to trigger the bond formation and the samples would not develop. Moreover, an optimum temperature should be provided for correct separation of compounds. That is about 25°C-room temperature. ...read more.