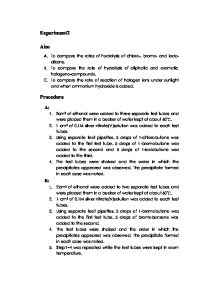 Comparing the rates of hydrolysis of chloro-, bromo- and iodo- alkane

3. Compare the effect of the phenyl group have on the rate of the hydrolysis reaction, the haloalkane is more reactive than the halobenzene. The steric repulsion of the substituents in the 5-bonds transition state of the carbonium ions raises energy and slows down the reaction effect in the halobenzene 4. The reaction is likely to be faster if ethanol is replaced by NaOH because OH ions in NaOH(aq) has negative charge while H2O has only lone pair, but in fact NaOH will react with AgNO3 and the solution will turn green. 5. AgNO3(aq) acidified with HNO3(aq) plus carbonate because 2Ag+(aq) + CO32-(aq) --> Ag2CO3(s) H+ removes Ag2CO3(s) ...read more.