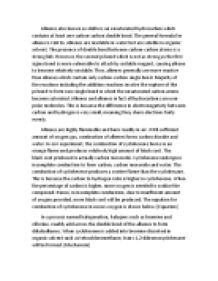 Comparison between Cyclohexane and Cyclohexene

﻿Alkenes also known as olefin is an unsaturated hydrocarbon which contains at least one carbon-carbon double bond. The general formula for alkene is CnH2n. Alkenes are insoluble in water but are soluble in orgainic solvent. The presence of double bond between carbon-carbon atoms is a strong link. However, the second pi bond which is not as strong as the first sigma bond is more vulnerable to attack by suitable reagent, causing alkene to become relatively unstable. Thus, alkenes generally are more reactive than alkanes which contain only carbon-carbon single bond. Majority of the reactions including the addition reactions involve the rupture of the pi bond to form new single bond in which the unsaturated carbon atoms become saturated. Alkenes and alkanes in fact all hydrocarbons are non-polar molecules. This is because the difference in electronegativity between carbon and hydrogen is very small, meaning they share electrons fairly evenly. ...read more.

When cyclohexene is added into bromine dissolved in organic solvent such as tetrachloromethane, trans-1,2-dibromocyclohexane will be formed. [Mechanism] On approaching the electron dense area of the pi bond of cyclohexene, the bromine molecule becomes polarized. The electron density of the bromine is shifted, so that one bromine atom is partially positive and the other is partially negative charged. The positively charged bromine atom acts as an electrophile, reacting with the C = C double bond, forming a carbocation. The subsequent attack of the bromide ion can proceed only from the back-side because the front-side attack is hindered. The result is formation the compound, trans-1,2-dibromocyclohexane. Both test tubes will actually obtain similar results as the halogenation process of alkene does not require exposition to the sunlight. Unlike the reaction of halogen with alkane, the reaction between alkene and halogen is spontaneous and able to occur at room temperature in the absence of UV light. ...read more.

The chemical equation for the reaction is as shown below.[Equation] On the other hand, cyclohexane has no reaction with the oxidizing agent. This is because this is the characteristic of alkenes which oxidize readily with room temperature. Alkanes are relatively stable. They do not form any correlation with oxidizing agent. Alkenes react with concentrated sulphuric acid in cold to produce alkyl hydrogensulphates. Similarly, cyclohexene reacts with concentrated sulphuric acid to form cyclohexyl hydrogen sulfate as shown in the following equation. Cyclohexene contains pi bonds which have higher electron density and therefore more susceptible to attack by electrophiles. Meanwhile, cyclohexane has only sigma bonds and therefore, less likely to be attacked by the electrophile. When carrying out part D, the mixture of cyclohexene and concentrated sulphuric acid is never mixed. This is because the shaking process will mix up everything, causing the three layers difficult to be seen. The mixing of the chemicals will produce a smelly odour and makes the test tube hard to clean. ...read more.