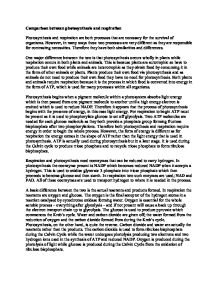 Comparison between photosynthesis and respiration

Respiration and photosynthesis need coenzymes that can be reduced to carry hydrogen. In photosynthesis the coenzyme present is NADP which becomes reduced NADP when it accepts a hydrogen. This is used to oxidise glycerate 3-phosphate into triose phosphate which then proceeds to become glucose and then starch. In respiration two such enzymes are used; NAD and FAD. All of these coenzymes are used to transport hydrogen to where it is needed in the process. A basic difference between the two is the actual reactants and products formed. In respiration the reactants are oxygen and glucose. The oxygen is the final acceptor of the hydrogen atoms in a reaction catalysed by cytochrome oxidase forming water. Oxygen is essential for the whole aerobic process - everything after glycolysis - and if not present will cause a back up through the electron transport chain up to glycolysis. The glucose is used to produce pyruvate which commences the Kreb's cycle. ...read more.

In photosynthesis there is the light dependent reaction in the thylakoid and the light independent reaction in the stroma. Another similarity in respect to different parts of each process is the actual location of each part. Anaerobic respiration occurs in the cytoplasm and aerobic respiration occurs in the mitochondria. The difference in location mirrors that of photosynthesis although within photosynthesis the whole process takes place within the chloroplasts; anaerobic respiration takes place outside the mitochondria. In conclusion, although respiration and photosynthesis are fundamentally very different processes with regards to purpose and the products and reactants involved they are still strikingly similar in many respects. This is due to the fact that both are essentially organic processes that involve very similar carbon based molecules as well as a number of other molecules such as ATP and the coenzymes. Both processes are ultimately concerned with provided the organism with energy and a source of energy to enable it to carry out other necessary processes. ...read more.