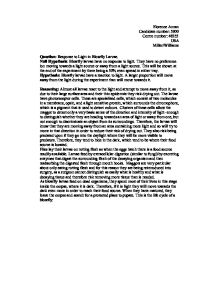 Florence Annan Candidate number: 5900 Centre number: 48255 U6A Miller/Williams Question: Response to Light in Blowfly Larvae. Null Hypothesis: Blowfly larvae have no response to light. They have no preference ion moving towards a light source or away from a light source. This will be shown at the end of the experiment by there being a 50% even spread in either tray. Hypothesis: Blowfly larvae have a reaction to light. A larger proportion will move away from the light during the experiment than will move towards it. Reasoning: Almost all larvae react to the light and attempt to move away from it, as due to their large surface area and their thin epidermis they risk drying out. The larvae have photoreceptor cells. These are specialized cells, which consist of two molecules in a membrane, opsin, and a light sensitive protein, which surrounds the chromophore, which is a pigment that is used to detect colours. Clusters of these cells allow the maggot to detect only a very basic sense of the direction and intensity of light- enough to distinguish whether they are heading towards an area of light or away from one, but not enough to discriminate an object from its surroundings. Therefore, the larvae will know that they are moving away from an area containing more light and so will try to move in that direction in order to reduce their risk of drying out. They also risk being predated upon if they go into the daylight where they will be more visible to predators. Therefore, they tend to hide in the dark, which tend to be where their food source is located. Flies lay their larvae on rotting flesh as when the eggs hatch there is a food source readily available. Larvae feed by extracellular digestion (similar to fungi) by excreting enzymes that digest the surrounding flesh of the decaying organism and then reabsorbing the digested flesh through mouth hooks. ...read more.

Travel A larvae can (by my preliminary investigations) move at a rate of over ten centimetres per minute. Therefore the experiment needs to run for at least this long in order to have results which aren't hampered by the speed with which the larvae can move. time The experiment has to run for the same amount of time and each section has to stop at the same time and a clean end must be made. In order to achieve this clean end, I am going to rig the system so that if I lift the top of it off the bridge is also removed. I am going to leave the experiment running for five minutes at a tiem in order to allow the maggots to clearly make a decision and to be in each of the cups at the end of the experiment. As the maggots cannot easily get out of the cups then this means that they should all be in one or the other at the end of the experiment. I will place the box quickly down on the table next to the collection trasys at the end of the experiment. Any maggots which have therefore not ended up in either of the cups can therefore be collected and counted after the others have been. Due to the clean cuts of the boxes they can also not escape. I will time the experiment with a stopwatch and will run it for exactly 5 minutes. Then the covers will be removed and then I will turn the lights on. slope The maggots may be influenced by gravity if one side is lower than the other The boxes have to be level and the bridge must also be level. humidity Maggots will move towards areas of higher humidity because respiration releases water. The areas of decomposing flesh will be more humid as the decomposing bacteria will release water through respiration. ...read more.

observed in a sample is consistent within a distribution. If 150 maggots are used then almost 50% can be expected in each side of the system, with a very small minority being neutral. This would show that the null hypothesis is correct and that there is no effect of light upon the direction that the maggots will travel in. I will now show an example using imaginary numbers: Set out a table as shown below, with the "observed" numbers and the "expected" numbers (i.e. our null hypothesis). Then subtract each "expected" value from the corresponding "observed" value (O-E) Square the "O-E" values, and divide each by the relevant "expected" value to give (O-E)2/E Add all the (O-E)2/E values and call the total "X2" dark light Total Observed numbers (O) 80 40 120 Expected numbers (E) 60*3 60*3 120 *1 O - E 20 -20 0 *2 (O-E)2 400 400 (O-E)2 / E 6.67 6.67 13.34 = X2 Now we must compare our X2 value with a ?2 (chi squared) value in a table of ?2 with n-1 degrees of freedom We have only one degree of freedom (n-1). From the ?2 table, we find a "critical value of 3.84 for p = 0.05. If our calculated value of X2 exceeds the critical value of ?2 then we have a significant difference from the expectation. It is still possible that we could have got this result by chance but it is very unlikely - a probability of less than 1 in 1000. But we could be 99.9% confident that some factor leads to a "bias" of the maggots towards moving away from the light section. [however the data cannot tell us why that is why as far as possible the variables must be controlled. We don't know if they are moving away from the light or towards something else.] I will also graph the data using bar charts for each section of maggots and then a total. I will use the chi squared on each of the 25 maggot sections and then the total ones as well. ...read more.