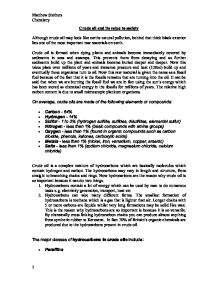 Crude oil and its value to society.

Crude oil and its value to society Although crude oil may look like earths natural pollution, behind that thick black exterior lies one of the most important raw materials on earth. Crude oil is formed when dying plants and animals become immediately covered by sediments in seas and swamps. This prevents them from decaying and as further sediments build up the plant and animals become buried deeper and deeper. Now this takes place over millions of years and immense pressure and heat (120oc) build up and eventually these organisms turn to oil. Now this raw material is given the name as a fossil fuel because of the fact that it is the fossils remains that are turning into the oil. It can be said that when we are burning the fossil fuel we are in fact using the sun's energy which has been stored as chemical energy in the fossils for millions of years. The relative high carbon content is due to small microscopic plankton organisms. On average, crude oils are made of the following elements or compounds: * Carbon - 84% * Hydrogen - 14% * Sulfur - 1 to 3% (hydrogen sulfide, sulfides, disulfides, elemental sulfur) * Nitrogen - less than 1% (basic compounds with amine groups) * Oxygen - less than 1% (found in organic compounds such as carbon dioxide, phenols, ketones, carboxylic acids) * Metals - less than 1% (nickel, iron, vanadium, copper, arsenic) * Salts - less than 1% (sodium chloride, magnesium chloride, calcium chloride) Crude oil is a complex mixture of hydrocarbons which are basically molecules which contain hydrogen and carbon. ...read more.

Once operating the column may be kept in an equilibrium state by maintaining the input of the crude oil at a flow rate which balances the total of the flow rate at which the fractions are removed. When a steady state exists the compositions of the liquid and vapor at any one tray do not vary. This enables the fractions at each tray to be drawn individually when required. Each tray will contain a narrow range of fractions with a narrow range of boiling points. The fractional distillation column will separate the crude oil into the following fractions: Refinery gasses, gasoline and naphtha, Kerosene, gas (diesel), oil and residue. Refinery gasses - Consist of simple alkanes containing up to four carbon atoms. They are used as fuels or as a source for building other molecules. Gasoline - Contains Alkanes with 5 - 10 carbons in the chain and is used in petrol. Naphtha - Most important source of chemicals for the chemical process industry. Kerosene - is used for jet fuel and domestic heating. Gas oil - is used as diesel fuel and as a feedstock for catalyst cracking. Residue - used as a source of lubricating oils and wax and bitumen. Bitumen - when mixed with crushed stone is the tarmac compound used for road surfaces. Although the crude oil has been separated into useful fraction, some of the separated 'trays' can be further processed to form products that are even more useful. Cracking - To obtain more useful alkanes and alkenes Heating the oil fractions with a catalyst. ...read more.

In the search for the alternatives, chemists and other scientists are now working to develop renewable resources such as: Biofuels This is when plants are grown to be used directly as fuels e.g. wood, animal waste and plant waste to produce alcohol and using waste products to produce biogas. Advantages - Renewable, help to reduce waste, used with simple technology. Disadvantages - Not large enough supply to replace fossil fuels at present rate of use. Nuclear Fuels Chain reaction involving the nuclei of isotopes of uranium 235 splitting to produce vast amounts of energy. Advantages - No carbon, nitrogen or sulphur as polluting byproducts. Disadvantages - Radioactive waste products are difficult to store and treat; which is a very expensive process Moving air: wind Energy of moving air is transferred into the motion of windmills and wind turbines Advantages - Renewable pollution and waste free; can be used in locality where energy is needed Disadvantages - Expensive, not reliable, noisy and ugly to the environment Hydroelectricity Water stored behind dams and waterfalls can be released and generate electricity by turning a generator. Advantages - Renewable, predictable, waste free and can be used on large scale. Disadvantages - Expensive to install, environmental impact of dams etc. Solar panels Panels of solar heat collectors, used to heat water in parts of world were sun is plentiful. Advantages - Renewable, no pollution Disadvantages - Require a lot of sunshine, Expensive initial cost, Very large scale to be suitable. Hydrogen Hydrogen is extracted quite cheaply from water by electrolysis and is used as a fuel. Advantages - No pollution as water is the only waste product. Disadvantages - Too dangerous and explosive, difficult to store and to use for transport or in domestic situations. ...read more.