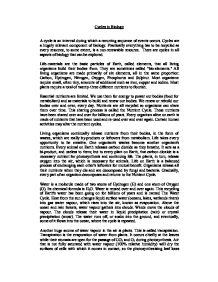 Cycles in Biology A cycle is an interval during which a recurring sequence of events occurs. Cycles are a hugely relevant component of biology. Practically everything has to be recycled as every resource, to some extent, is a non-renewable resource. There are cycles in all aspects of biology that can be explored. Life-materials are the basic particles of Earth, called elements, that all living organisms build their bodies from. They are sometimes called "bio-elements." All living organisms are made primarily of six elements, all in the same proportion: Carbon, Hydrogen, Nitrogen, Oxygen, Phosphorus and Sulphur. Most organisms require small, often tiny, amounts of additional such as iron, copper and iodine. Most plants require a total of twenty-three different nutrients to flourish. Essential nutrients are limited. We use them for energy to power our bodies (food for metabolism) and as materials to build and renew our bodies. We renew or rebuild our bodies over and over, every day. Nutrients are all recycled so organisms can share them over time. This sharing process is called the Nutrient Cycle. These nutrients have been shared over and over for billions of years. Every organism alive on earth is made of nutrients that have been used and re-used over and over again. ...read more.

Organic forms of carbon in the lithosphere include litter, organic matter, and substances found in soils. Some carbon dioxide is released from the interior of the lithosphere by volcanoes. The nitrogen cycle is the complex series of reactions by which nitrogen is slowly but continually recycled in the atmosphere, lithosphere and hydrosphere. The nitrogen cycle represents one of the most important nutrient cycles found in the earths ecosystems and almost all of the nitrogen found in any ecosystem originally came from the atmosphere. Nitrogen is used by living organisms to produce a number of complex organic molecules such as amino acids, proteins, and nucleic acids. The largest store of nitrogen is found in the atmosphere where it exists as a gas. Other major stores of nitrogen include organic matter in soil and the oceans. Despite its abundance in the atmosphere, nitrogen is often the most limiting nutrient for plant growth as they can only take up nitrogen in certain forms. Most plants obtain the nitrogen they need as inorganic nitrate from the soil solution. Animals receive the required nitrogen they need for metabolism, growth, and reproduction by the consumption of living or dead organic matter containing molecules composed partially of nitrogen. ...read more.

Most of the energy made available by the oxidative steps of the cycle is transferred as energy-rich electrons to NAD+, forming NADH. For each acetyl group that enters the Krebs cycle, three molecules of NAD+ are reduced to NADH. In Step 6, electrons are transferred to the electron acceptor FAD rather than to NAD+. In one turn of the citric acid cycle, two molecules of carbon dioxide and eight hydrogen atoms are removed, forming three NADH and one FADH2. The carbon dioxide produced accounts for the two carbon atoms of the acetyl group that entered the citric acid cycle. These hydrogens come from water molecules that are added during the reactions of the cycle. Because two acetylcholine molecules are produced from each glucose molecule, the cycle must turn twice to process each glucose. At the end of each turn of the cycle, the four-carbon oxaloacetate is left, and the cycle is ready for another turn. After two turns of the cycle, the original glucose molecule has lost all of its carbons and may be regarded as having been completely consumed. Only one molecule of ATP is produced directly with each turn of the citric acid cycle. The rest of the ATP that is formed during aerobic respiration is produced by the electron transport system. ...read more.