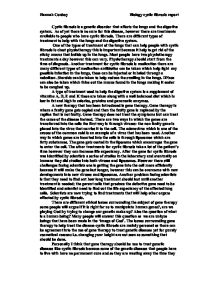 Cystic fibrosis is a genetic disorder that affects the lungs and the digestive system. As of yet there is no cure for this disease, however there are treatments available to people who have cystic fibrosis. There are different types of treatment to help with the lungs and the digestive system. One of the types of treatment of the lungs that can help people with cystic fibrosis is chest physiotherapy this is important because it help to get rid of the sticky mucus that builds up in the lungs. Most people have two physiotherapy treatments a day however this can vary. Physiotherapy should start from the time of diagnosis. Another treatment for cystic fibrosis is medication there are many different types of medication antibiotics can be taken which help fight any possible infection in the lungs, these can be injected or inhaled through a nebuliser. ...read more.

The adenovirus which is one of the causes of the common cold is an example of a virus that has been used. Another way in which genes are inserted into the cells is through liposomes which are fatty substances. The gene gets coated in the liposome which encourages the gene to enter the cell. The other treatments for cystic fibrosis take a lot of the patient's time however they can increase life expectancy. After the gene for cystic fibrosis was identified by scientists a series of studies in the laboratory and eventually on humans they did studies into both viruses and liposomes. However there still challenges facing scientists one is getting the gene into the cell more efficiently because it will make the gene last longer, however this can be overcome with new developments into new viruses and liposomes. ...read more.

Personally I think that gene therapy should be use to treat genetic diseases like cystic fibrosis because some of the genetic diseases that people have to live with have no permanent cure and so they are wasting away the time they could use to live their lives on treatments that just hide the pain and take away the symptoms associated with the genetic disease they have. I don't think that gene therapy should be used for cosmetical reasons e.g. altering height etc. In conclusion gene therapy is a good thing that can be used to help treat the causes of genetic diseases not just the symptoms that are associated with them. I think that eventually in the future there will be major developments into scientific technology which will enable scientists to come up with new treatments that work effectively to help treat the causes and symptoms of genetic diseases or research will be done into finding cures for these genetic diseases like cystic fibrosis. http://www.world-of-fungi.org/Mostly_Medical/William_Bates/ethics.htm http://www.srtp.org.uk/genthpy1.htm#Issues ?? ?? ?? ?? Hannah Conboy Biology cystic fibrosis report ...read more.