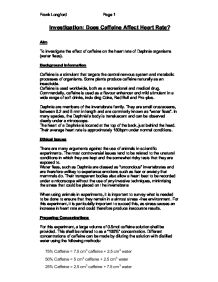 Investigation: Does Caffeine Affect Heart Rate? Aim To investigate the effect of caffeine on the heart rate of Daphnia organisms (water fleas). Background Information Caffeine is a stimulant that targets the central nervous system and metabolic processes of organisms. Some plants produce caffeine naturally as an insecticide. Caffeine is used worldwide, both as a recreational and medical drug. Commercially, caffeine is used as a flavour enhancer and mild stimulant in a wide range of soft drinks, including Coke, Red Bull and Pro-plus. Daphnia are members of the invertabrate family. They are small crustaceans, between 0.2 and 5 mm in length and are commonly known as "water fleas". In many species, the Daphnia'a body is transluscant and can be observed clearly under a mircoscope. The heart of a Daphnia is located at the top of the back, just behind the head. Their average heart rate is approximately 180bpm under normal conditions. Ethical Issues There are many arguments against the use of animals in scientific experiments. The most controversial issues tend to be related to the unatural conditions in which they are kept and the somewhat risky tests that they are exposed to. ...read more.

Setting up a Microscope (Adapted from SNAB website, Practical Support article 8) * Check that the lens, eyepiece and stage are clean. If the lens needs cleaning, use a lens tissue. * Illuminate the stage. If present, use the built-in light; otherwise use the mirror and the light from a window or a bench lamp placed 15-20 cm away to reflect light up through the hole in the stage. When using a lamp, check that the light is not shining onto the stage from above. * Adjust the sub-stage condenser if present Place a slide on the stage and a pointed object such as a pencil on the light source. Adjust the condenser until both are in focus. * Adjust the light intensity using the iris diaphragm or light control k**b. Check the field of view is evenly illuminated and then reduce the light as much as possible without getting a shadow around the edge of the image. * Place the slide in position. Do not tilt the stage, as there is liquid present in the slide. * Check that the low-power objective lens is in position. Bring the lens as close to the slide as possible. ...read more.

There are a few systematic errors that could have occurred due to faults in the method. For instance, the use of faulty or inaccurate measuring equipment when diluting the caffeine solution could have caused imprecise measurements of caffeine to be used. This could have lead to consistently inaccurate results. Another source of error could have been the actual counting of the Daphnia's heartbeats. Because the specimen had a rather unusual internal organ structure, it was difficult to distinguish the heat from the stomach at first glance. The lighting of the microscope was also inadequate and could have caused the recorder to initiate a "subconscious" counting rhythm, producing inaccurate results. To improve the investigation, these measures could be taken * A stroboscope could be used to record the Daphnia, and then play back the video at half speed. This would allow counting of the heartbeats to be calculated much more easily and accurately, increasing the validity of results. * The Daphnia used could be raised from larvae to ensure that they are the same age. Different aged Daphnia may, like humans, experience variation in their average heartbeat, therefore the results gathered from specimens of the same age would be more reliable. ?? ?? ?? ?? Frank Longford Page 1 ...read more.