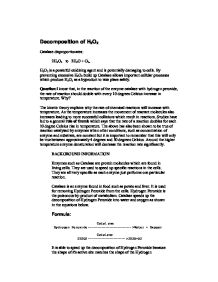 Decomposition of H2O2 Catalase disproportionates: 2H2O2 to 2H2O + O2, H2O2 is a powerful oxidizing agent and is potentially damaging to cells. By preventing excessive H2O2 build up Catalase allows important cellular processes which produce H2O2 as a byproduct to take place safely. Question:I know that, in the reaction of the enzyme catalase with hydrogen peroxide, the rate of reaction should double with every 10 degrees Celsius increase in temperature. ...read more.

The above has also been shown to be true of reaction catalysed by enzymes when other conditions, such as concentration of enzyme and substrate, are constant but it is important to remember that this will only be true between approximately 4 degrees and 50 degrees Celsius. Around the higher temperature enzyme denaturation will decrease the reaction rate significantly. BACKGROUND INFORMATION Enzymes such as Catalase are protein molecules which are found in living cells. ...read more.