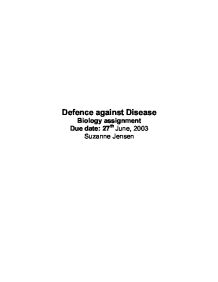 D. The clonal-selection theory of antibody production * The B cell selected by the antigen reproduces rapidly to give rise to a number of identical cells. Each of these cells also reproduces rapidly to produce a large clone of cells. * Some of the B cells produced differentiate into other cells called B-memory cells. B memory cells also have the same antibody-antigen specificity as the parent B cell. Plasma cells survive for only a few days but memory cells can survive for several years. * Figure 8.14 E. How much antibody is produced? * On a second infection the concentration of antibodies rises much more rapidly then during the primary response and many more antibodies are released. * Figure 8.15 F. Structure of an antibody * An antibody molecule had four polypeptide chains, two long heavy chains and two shorter light chains joined together * Immunity involving antibodies in body fluids is called humoral immunity * Table 8.2 G. Different kinds of antibodies * IgM and IgG antibodies activate macrophages and the complement system and are particularly active against bacteria and their toxins. IgA antibodies play an important role in surfaces that are vulnerable to infection and are present in the mast cells which release histamines. H. T cells * After encountering their specific antigens, T cells reproduce rapidly in the same way as B cells and T-memory cells also form. ...read more.

Immune deficiency diseases * Immune deficiency is a malfunction or a deficiency in one or more components of the immune system. Immune deficiency disorders can be inherited or may develop as a result of some other disease. E. Acquired immune deficiency syndrome (AIDS) * It is generally accepted that acquired immune deficiency (AIDS) is caused by the human immunodeficiency virus (HIV). This virus only infects cells carrying a particular protein marker. The marker is found mainly on mature helper T cells and to a lesser extent on macrophages. * Figure 8.38 * The development of the disease after infection with HIV is variable * Once the serious symptoms of AIDS appear, death usually follows within about two years. F. Do plants have an immune system? * Most plants are resistant to pathogens * Mechanical barriers- The silicon content of some leaves makes them particularly resistant to the degrading enzymes of pathogens. If a disease-causing organism penetrates the outer layers, and the stomata in particular can be a point of entry; layers of thickened cells form in many cases. This gives rise to abnormal swellings at the infection site. These swellings are called galls. * Galls are caused by pathogenic organisms, including insects and nematode worms. * Chemical barriers- Some plants resist disease by producing chemicals that act as antibiotics * Chemicals that have a defence role in plants include: resins, tannins and phenolic substances ...read more.