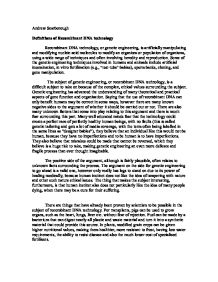 Andrew Scarborough Definitions of Recombinant DNA technology Recombinant DNA technology, or genetic engineering, is artificially manipulating and modifying nucleic acid molecules to modify an organism or population of organisms, using a wide range of techniques and often involving heredity and reproduction. Some of the genetic engineering techniques involved in humans and animals include artificial insemination, in vitro fertilization (e.g., "test-tube" babies), sperm banks, cloning, and gene manipulation. The subject of genetic engineering, or recombinant DNA technology, is a difficult subject to take on because of the complex, ethical values surrounding the subject. Genetic engineering has advanced the understanding of many theoretical and practical aspects of gene function and organization. Saying that the use of recombinant DNA can only benefit humans may be correct in some ways, however there are many known negative sides to the argument of whether it should be carried out or not. There are also many unknown factors that come into play relating to this argument and there is much fear surrounding this part. Many well educated minds fear that the technology could create a perfect race of perfectly healthy human beings, with no faults (this is called genetic tailoring and gets a lot of media coverage, with the term often being labelled in the same lines as "designer babies"), they believe that an individual like this would not be human, because they have no imperfections and to be human is to have imperfections. ...read more.

This would greatly enhance the cattle's life by reducing suffering. In the case of plants, it is morally and ethically wrong for farmers to spray crops with insecticides and dip animals to cut down on insect infestations. However, the needless suffering of the animals could be stopped by genetically engineering, to repel the insects which make their lives miserable. Likewise, the damage which the toxic insecticides are subjecting the land and people too could be stopped by genetically modified crops, which resist insect damage. All life is sacred and mankind has inhabited areas and built on land, stealing valuable animal habitats, many of these species are endangered as a result. It would be morally wrong to allow these species to survive in previously uninhabitable places, or perhaps, even help them reproduce more readily. If we look at the statement from a Christian's point of view, the use of DNA technology would be morally wrong, even for the sole benefit of humans. Religion, will always be a difficult topic for scientists to try and avoid and is a very difficult subject to touch on through science. Christians believe that we are all God's creatures and should be treated equally. That being so, if Christianity thought genetic engineering was morally acceptable, it should benefit life of all kinds. ...read more.

Potentially, many diseases could be far less common or possibly even wiped out in some cases, people could be born healthy, Transplanted genes could be developed in crops that are resistant to environmentally friendly herbicides and pesticides, allowing farmers to have weed and insect control while not harming the environment. Without disability or illness, the overwhelming cost of treating these diseases could go down, transplants could be available on demand and hospital waiting lists could be abandoned. The negatives, however, balance alongside the positives and provoke a stronger reaction to people who oppose recombinant DNA technology because of their moral values. Negatives include the possibility of new diseases being (possibly incurable) made during the process of healing, a perfect human being may lose their humanity and it may only mostly be available to the rich, which could create a new system of class. Genetic engineering would effect the environment and economical health aspects. Although greatly frowned upon, genetic engineering is already having an impact on biological research, medicine, industry and agriculture, however Mankind could benefit greater from these innovations if it was more accepted by the majority. Sources websites http://www.wblcoll.vic.edu.au/isp/genetic.htm- contains scientific journals http://www.mhhe.com/biosci/cellmicro/prescott/student/chap15.mhtml http://www.gene.com/ae/AB/BA/ http://starklab.slu.edu/Coulter/genetics/cloning.html Britannica Encyclopaedia Books Babel's Shadow- Genetic Technologies in a Fracturing Society (contains scientific journals) Author: Peter Moore A Brave New World? Author: John Scally The Frankenstein Syndrome Autor: Bernard E Rollin ...read more.