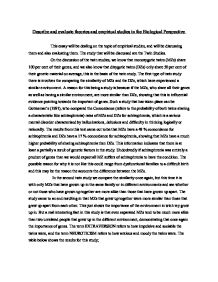 Describe and evaluate theories and empirical studies in the Biological Perspective.

Describe and evaluate theories and empirical studies in the Biological Perspective This essay will be dealing on the topic of empirical studies, and will be discussing them and also evaluating them. The study that will be discussed are the Twin Studies. On the discussion of the twin studies, we know that monozygotic twins (MZs) share 100 per cent of their genes, and we also know that dizygotic twins (DZs) only share 50 per cent of their genetic material on average, this is the basis of the twin study. The first type of twin study there is involves the comparing the similarity of MZs and the DZs, which have experienced a similar environment. A reason for this being a study is because if the MZs, who share all their genes as well as having a similar environment, are more similar than DZs, showing that this is influential evidence pointing towards the important of genes. ...read more.

In the second twin study we compare the similarity once again, but this time it is with only MZs that have grown up in the same family or in different environments and see whether or not those who have grown up together are more alike than those that have grown up apart. The study came to an end resulting in that MZs that grew up together were more similar than those that grew up apart from each other. This just shows the importance of the environment in wich tey grow up in. But a real interesting fact in this study is that even separated MZs tend to be much more alike than two unrelated people that grew up in the different environment, demonstrating that once again the importance of genes. The term EXTRAVERSION refers to how impulsive and sociable the twins were, and the term NEUROTICISM refers to how anxious and moody the twins were. ...read more.

In fact because MZs look alike more than DZs, people may tend to treat them more similar manner meaning that this will become a similar environment as well as the same genes. So the meaning of all this is that when comparing the two different types of twins, MZs and DZs we can not know to what extent we are seeing the influence of genes and to what extent the effect of environment. When looking at the plus and minus points of the study it points towards the minus, although the evidence of the importance of the role of the gene is a powerful plus. This is ruined by the not know to what extent is influenced by genes and what extent is influenced by environment, and by the study in which is shown that MZs reared together are more similar to DZs reared together, because if the MZs have a more similar environment together than the DZ, it may just as well be the identical genes lead to the greater similarity. ...read more.