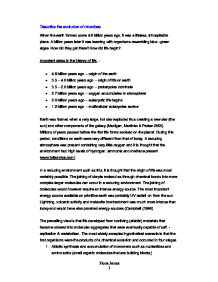 Describe the evolution of microbes.

Comparisons of selected molecules suggest an early split of prokaryotes into the archaebacteria (live in extreme environments) and all other prokaryotes, the eubacteria. However, it is agreed that proteins, nucleic acids and lipids provided the raw materials for the first cells. Observations in laboratory experiments show that lipid molecules can join together forming spheres that represent structures similar to plasma cell membranes. It is believed that after millions of years of collisions between molecules, the lipid spheres had enclosed RNA molecules within. These would have been ancestors to the first prokaryotic cell (Campbell 1996). Life could not exist until a collection of specific catalysts appeared that could promote the synthesis of more catalysts of the same kind. It is believed that early stages in the evolutionary pathway centred on RNA molecules. These present specific catalytic surfaces and also can potentially duplicate through the formation of a complementary RNA molecule. Therefore it was assumed that a small RNA molecule arose that would have been able to catalyse its own duplication. This kind of RNA duplication would have been far from perfect, so many variant RNA molecules would have arisen. At some point during the evolution of biological catalysts the first cells were formed (www.britannica.com). The oldest evidence for life comes from fossils of filamentous and spherical prokaryotes found in structures called stromatolites. ...read more.

(Purves, Sadava et al 2001) It is the degree of similarity in ribosomal RNA sequences between two organisms that indicates an evolutionary relatedness. From this, phylogenetic trees are produced to show the most probable evolutionary position of organisms relative to one another. From these studies, it is thought that there was an early split of the prokaryotes into the archae bacteria that live in conditions similar of primitive earth and all other prokaryotes. Some studies propose that archae bacteria may be more closely related to eukaryotes. (Madigan, Martinko & Parker 2003) However, there is still controversy over prokaryotic phylogeny in that genes have been moving amongst prokaryotic species by a process called lateral gene transfer. In time the genes transferred become inherited by the recipient and will be recognised as part of the normal genome of the descendant. Therefore new phylogenetic patterns will continue to emerge. The study of evolution is difficult because it started after an event that occurred several billion years ago. It is clear that life originated from non-living matter, but scientists can only really speculate what happened. Experiments in laboratory situations simulating primitive earth can give us clues as to what may have occurred. The study of evolution will continue to bring forward new ideas and theories as scientific knowledge is increased. ...read more.