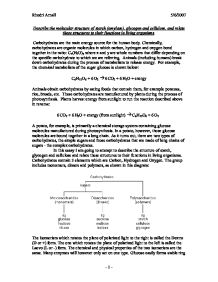 Describe the molecular structure of starch (amylase), glycogen and cellulose, and relate these structures to their functions in living organisms.

Non-reducing sugars can also be tested for using Benedict's reagent but first require addition of an acid and heating to hydrolyze (break apart) the sugar. The acid must then be neutralized using an alkali like sodium hydroxide before carrying out the test as described above. Polysaccharides are long chains of many monosaccharides joined together by glycosidic bonds and through a condensation reaction. Each successive monosaccharide is added by means of a glycosydic bond, as in disaccharides. The final molecule may be several thousand monosaccharideunits long, forming a macromolecule. The most important polysaccharides are starch, glycogen and cellulose, all of which are polymers of glucose. Polysaccharides are not sugars. Since glucose is the main source of energy for cells, it is important for living organisms to store it in an appropriate form. If glucose itself accumulated in cells, it would dissolve and make the contents of the cell to concentrated, which would seriously affect its osmotic properties. It is also a reactive molecule and would interfere with normal cell chemistry. These problems are avoided by converting it, by condensation reactions, to a storage polysaccharide, which is a convenient, compact, inert and insoluble molecule. This is in the form of starch in plants and glycogen in animals. Glucose can be made available again quickly by an enzyme- controlled reaction. Starch is the principal polysaccharide used by plants to store glucose for later use as energy. Plants often store starch in seeds or other specialized organs, for example, common sources of starch include rice, beans, wheat, corn, potatoes, etc. When humans eat starch, an enzyme that occurs in saliva and in the intestines called amylase breaks the bonds between the repeating glucose units thus allowing the sugar to be absorbed into the bloodstream. Once absorbed into the bloodstream, the human body distributes glucose to the areas where it is needed for energy or stores it as its own special polymer - glycogen. ...read more.

Together the cellulose and pectins give exceptional mechanical strength. The cell wall is also permeable to a wide range of substances. Here are some other polysaccharides that I find interesting. * Chitin (poly glucose amine), found in fungal cell walls and the exoskeletons of insects. * Pectin (poly galactose uronate), found in plant cell walls. * Agar (poly galactose sulphate), found in algae and used to make agar plates. * Murein (a sugar-peptide polymer), found in bacterial cell walls. * Lignin (a complex polymer), found in the walls of xylem cells, is the main component of wood. Functions of carbohydrates 1. Substrate for respiration (glucose is essential for cardiac tissues). 2. Intermediate in respiration (e.g. glyceraldehydes). 3. Energy stores (e.g. starch, glycogen). 4. Structural (e.g. cellulose, chitin in arthropod exoskeletons and fungal walls). 5. Transport (e.g. sucrose is transported in the phloem of a plant). 6. Recognition of molecules outside a cell (e.g. attached to proteins or lipids on cell surface membrane). The following table classifies carbohydrates. Monosaccharides (one sugar unit) Disaccharides (two sugar units) Polysaccharides (many sugar units) Glucose Maltose Starch Fructose Sucrose Glycogen Galactose Lactose Cellulose Pectins Both starches and cellulose are carbohydrates which are classified as polysaccharides since they are composed of chains of glucose molecules. While they are similar, starches can be used as energy sources by the human body while cellulose cannot. Enzymes are important in the metabolism of foods, and these enzymes are very specific. They are somewhat like keys which will fit the geometry of the starch bonds, but not those of the cellulose bonds. The carbohydrates are the compounds which provide energy to living cells. They are compounds of carbon, hydrogen and oxygen with a ratio of two hydrogens for every oxygen atom. The carbohydrates we use as foods have their origin in the photosynthesis of plants. The name carbohydrate means "watered carbon" or carbon with attached water molecules. Many carbohydrates have empirical formuli which would imply about equal numbers of carbon and water molecules. For example, the glucose formula C6H12O6 suggest six carbon atoms and six water molecules. Rhodri Arnall 5/6/2007 - 1 - ...read more.

A good account of the structure and functions of starch, glycogen and cellulose. However it is very text heavy and would benefit from labelled diagrams when explaining harder concepts. 4 stars.