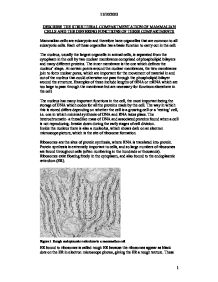 DESCRIBE THE STRUCTURAL COMPARTMENTATION OF MAMMALIAN CELLS AND THE DIFFERING FUNCTIONS OF THESE COMPARTMENTS Mammalian cells are eukaryotic and therefore have organelles that are common to all eukaryotic cells. Each of these organelles has a basic function to carry out in the cell. The nucleus, usually the largest organelle in animal cells, is separated from the cytoplasm in the cell by two nuclear membranes comprised of phospholipid bilayers and many different proteins. The inner membrane is the one which defines the nucleus' shape. At certain points around the nuclear membranes, the two membranes join to form nuclear pores, which are important for the movement of material in and out of the nucleus that could otherwise not pass through the phospholipid bilayer around the structure. Examples of these include lengths of tRNA or mRNA which are too large to pass through the membrane but are necessary for functions elsewhere in the cell. The nucleus has many important functions in the cell, the most important being the storage of DNA which codes for all the proteins made by the cell. The way in which this is stored differs depending on whether the cell is a growing cell or a 'resting' cell, i.e. one in which minimal synthesis of DNA and RNA takes place. The heterochromatin- a threadlike mass of DNA and associated proteins found when a cell is not reproducing- breaks down during the early stages of cell division. ...read more.

Another very important cell organelle is the mitochondrion. Mitochondria are the sites of aerobic respiration, and generally are the major energy production centre in eukaryotes. Mitochondria have two membranes, an inner and an outer, clearly visible in this electron microscope photo of a mitochondrion. There are many reticulations, or many infoldings, of the inner membrane. This serves to increase the surface area of membrane on which membrane-bound reactions can take place. The existence of this double membrane has led many biologists to theorize that mitochondria are the descendants of some bacteria that was endocytosed by a larger cell billions of years ago, but not digested. This fascinating theory of symbiosis, which might lend an explanation to the development of eukaryotic cells, has additional supporting evidence. Mitochondria have their own DNA and their own ribosomes; and those ribosomes are more similar to bacterial ribosomes than to eukaryotic ribosomes. Mitochondria "occupy up to 25% of the volume of the cytoplasm."(Reference 1- Lodish et al, see references).They are the main sites of ATP production, the energy currency of cells. Figure 3 an electron microscope view of a mitochondrion. The mitochondrion, the second largest organelle with unique genetic structure, performs many functions, including the recycling of product of the cell's metabolism, the formation of urea, transportation of proteins, and the synthesis of ATP. Respiration of glucose occurs here, with 28 molecules of ATP being produced per glucose molecule in mitochondria. ...read more.

In many cases it holds the shape of the cell to due pressure of water against the outside. All of the membranes that hold the organelles, as well as the cell itself are comprised of proteins and phospholipids in different ratios in the fluid mosaic model seen below. Figure 4 the fluid mosaic model of membranes in the cell The entire cell is enclosed by a single cell membrane comprised of a fluid mosaic mix of proteins and phospholipids with carbohydrates that interact with the environment on the outer side of the membrane. The cell membrane provides a semi-permeable barrier and an alternative environment to the cytoplasm for organelles to be situated, providing anchorage sites. It can also detect changes in the extracellular environment. Every mammalian cell serves a function for the structure or organ around it, and different cell functions require different amounts of each organelle. For example, a very metabolically active cell such as those in the muscles would require a large amount of mitochondria, and a pancreatic cell whose main function involves secretions would have many rough endoplasmic reticulum organelles. Some mammalian cells do not have certain organelles at all, but these are very specialised cells such as red blood cells and are not common, as most cells have basically the same organelle structures. ...read more.

This essay covers the structure and function of mammalian cell organelles in a fair level of detail, certainly adequate for A' Level. The information provided about each organelle is well-organised and accurate. However, the essay could be improved significantly by focusing on a unifying theme - compartmentalisation. The writer does refer briefly to this concept at the start but it gets lost as the essay proceeds. The functions of the cell often need to be kept separate from other activities, eg. the hydrolytic enzymes of lysosomes must not spill out into the cytoplasm. On the other hand, organelles frequently work together. Ribosomes make protein which the Golgi modifies and packages into lysosomes or secretory vesicles. Overall, then, the essay is a good starting point with regard to organelle structure and function, but would have benefited from a discussion of why compartmentalisation was created, and how compartments work together.