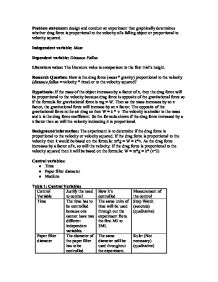 Background information: The experiment is to determine if the drag force is proportional to the velocity or velocity squared.

Relevant Formulas Used In The Experiment:

Processed Data for the Experiment:

The procedures are valid because they proved it was proportional to the velocity squared. One of the systematic errors was the ruler. To avoid, this error – one can use a magnifying glass to measure to the millimeter point. The systematic error increased the value by .05m. This is the uncertainty of the results. This is not accurate but precise because the results are similar but they are not accurate because they are off by .05m.

Improvements that can be made in the lab are the use of better equipment such as a computerized system that will measure the velocity at each point instead of when it only hits the ground. The procedures do not have to be manipulated because they proved the theory that air drag is based on velocity squared. The suggestions to improve the systematic error would be to use a magnifying glass to better see the lines on the ruler.