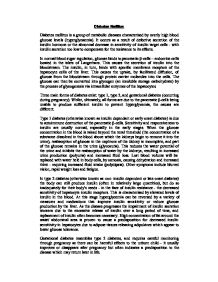 Diabetes Mellitus Diabetes mellitus is a group of metabolic diseases characterised by overly high blood glucose levels (hyperglycaemia). It occurs as a result of defective secretion of the insulin hormone or the abnormal decrease in sensitivity of insulin target cells - with insulin secretion too low to compensate for the resistance to its effects. In normal blood sugar regulation, glucose binds to pancreatic �-cells - endocrine cells located in the islets of Langerhans. This causes the secretion of insulin into the bloodstream. The insulin, in turn, binds with specific membrane receptors of the hepatocyte cells of the liver. This causes the uptake, by facilitated diffusion, of glucose from the bloodstream through protein carrier molecules into the cells. The glucose can then be converted into glycogen (an insoluble storage carbohydrate) by the process of glycogenesis via intracellular enzymes of the hepatocytes. Three main forms of diabetes exist: type 1, type 2, and gestational diabetes (occurring during pregnancy). Whilst, ultimately, all forms are due to the pancreatic �-cells being unable to produce sufficient insulin to prevent hyperglycemia, the causes are different. ...read more.

This is characterised by elevated levels of insulin in the blood. At this stage hyperglycemia can be reversed by a variety of measures and medications that improve insulin sensitivity or reduce glucose production by the liver. As the disease progresses the impairment of insulin secretion worsens due to the excessive release of insulin over a long period of time, and replacement of insulin often becomes necessary. High concentration of fat around the waist/ abdominal area is proven to cause a predisposition for decreased insulin sensitivity in hepatocytes due to adipose tissues releasing adipokines which appear to lower glucose tolerance. Gestational diabetes resembles type 2 diabetes, and requires careful monitoring through pregnancy as there can be harmful effects to the unborn child - it usually improves or disappears after pregnancy but often indicates a predisposition to the disease which may return later in life. The fasting blood glucose test is the preferred way to diagnose diabetes. After no food intake for at least 8 hours, a single sample of blood is drawn and analysed. Normal fasting plasma glucose levels are less than 100mgdm-3. ...read more.

Unlike many medicines, insulin cannot be taken orally because it is hydrolysed into amino acids in digestion, and no longer functions. An inhaled insulin treatment was developed but was discontinued because of poor cost effectiveness. In type 2 diabetes medication is designed to increase the insulin output by the pancreas, decrease the amount of glucose released from the liver and increase the sensitivity (response) of cells to insulin. It is also designed to decrease the absorption of carbohydrates from the intestine and promote slow emptying of the stomach to delay the presentation of carbohydrates for digestion and absorption in the small intestine. Apart from insulin and medication, a specific diet, exercise and eating at the same time each day is suggested to control the condition. The diet most often recommended for people who suffer from diabetes mellitus is one that is high in soluble fibre, but low in fat (especially saturated fat). Patients may be encouraged to reduce their intake of carbohydrates that have a high glycemic index - unless they notice that they are hypoglyemic and would then eat foods with a high glucose content - for immediate blood glucose replenishment - followed by a carbohydrate which releases glucose more slowly (i.e. starch). ...read more.