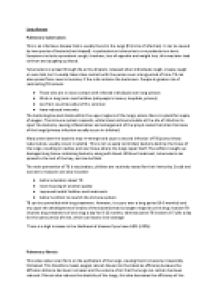 ﻿Lung disease Pulmonary tuberculosis This is an infectious disease that is usually found in the lungs (first site of infection). It can be caused by two species of bacteria (rod shaped): mycobacterium tuberculosis or mycobacterium bovis. Symptoms include a persistent cough, tiredness, loss of appetite and weight loss, this may later lead to fever and coughing up blood. Tuberculosis is spread through the air by droplets, released when individuals cough, sneeze, laugh or even talk, but it usually takes close contact with the person over a long period of time. TB can also spread from cows to humans, if the milk contains the bacterium. People at greater risk of contracting TB include: 1. Those who are in close contact with infected individuals over long periods 2. Work in long term care facilities (old people?s homes, hospitals, prisons) 3. Are from countries where TB is common 4. have reduced immunity The bacteria grow and divide within the upper regions of the lungs, where there is a plentiful supply of oxygen. ...read more.

Fibrosis also reduces the elasticity of the lungs, this also decreases the efficiency of the lungs and makes it harder to breathe and ventilate the lungs. The effects of fibrosis on the lungs: 1. Shortness of breath, especially when exercising- a considerable volume of air space is occupied by fibrous tissue so less oxygen can be taken into the lungs with each breath. Diffusion is also extremely slow where the alveoli epithelium has been thickened. The loss of elasticity makes it hard to ventilate the lungs and therefore hard to maintain a diffusion gradient across the exchange surface 2. Chronic dry cough- occurs because fibrous tissue and dead cells create an obstruction in the airways of the lungs, which the body tries to move by coughing 3. Chest pain- a consequence of pressure and damage from the mass of fibrous tissue in the lungs, scarring due to coughing, and having to breathe harder to take in oxygen. 4. Weakness and fatigue- due to the reduced intake of oxygen into the blood, released energy by cellular respiration is reduced. ...read more.

An increase in air pollution, dress and chemicals in manufactured products/food has led to a rise in the disease. Asthma can be relieved using steroids or bronchodilators Emphysema This disease develops over a period of 20 years and is impossible to diagnose until lungs have been irreversibly damaged. Healthy lungs contain a large quantity of elastic tissue (made from protein elastin). It stretches when we breathe in and spring back when we breathe out. With emphysema, the elastin becomes permanently stretched; air cannot be forced out the alveoli. Surface area of the alveoli can decrease and they can sometimes burst, little gas exchange can occur. Symptoms of emphysema include: 1. Shortness of breath- due to difficulty exhaling hair where lungs have lost elasticity, meaning it is difficult t inhale fresh hair containing oxygen. The smaller alveolar surface area means reduced oxygen levels in the blood, oxygen supply is attempted to be increase by rapid breathing 2. Chronic cough- consequence of lung damage, body tries to remove damaged tissue and mucus that cannot be removed naturally because cilia have been destroyed 3. Blush skin coloration- due to low levels of oxygen as a result of poor gas diffusion ...read more.