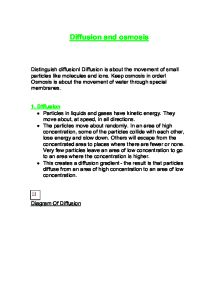 Diffusion and osmosis Distinguish diffusion! Diffusion is about the movement of small particles like molecules and ions. Keep osmosis in order! Osmosis is about the movement of water through special membranes. 1. Diffusion * Particles in liquids and gases have kinetic energy. They move about, at speed, in all directions. * The particles move about randomly. In an area of high concentration, some of the particles collide with each other, lose energy and slow down. Others will escape from the concentrated area to places where there are fewer or none. Very few particles leave an area of low concentration to go to an area where the concentration is higher. ...read more.

For example, the blood constantly removes oxygen from alveolar air spaces in the lungs, provided that there is more oxygen in the alveolar air spaces than in the blood. The circulation takes the oxygen-rich blood away and replaces it with blood low in oxygen. Diagram of Example of Diffusion 3. Osmosis * Some membranes in plant and animal cells allow certain particles to pass through them and not others. They are selectively permeable. * The diffusion of water through a selectively permeable membrane is called osmosis. The rate at which osmosis takes place is affected by the concentration of water in the two solutions on each side of the membrane. ...read more.

* When the concentration of water is the same on both sides of the membrane, the movement of water will be the same in both directions. At this point, the net exchange of water is zero and the system is in equilibrium. Diagrams Of Osmosis Wise-up words To help you remember these words write them down with their meanings on a card called 'Movement of particles'. Word Meaning Diffusion Molecules and ions diffuse from regions of higher concentration to regions of lower concentration. Osmosis Osmosis is the diffusion of water through a selectively permeable membrane. Selectively permeable Something that selects or allows some things to pass through it and not others. Concentration gradient Where two areas have different concentrations of the same thing. ...read more.