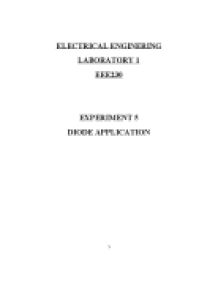 CONCLUSION part A From that experiment we can conclude the diode can change the AC input to the DC output. Because the diode just allows current flow to it just in one direction only. How we know in this experiment we find many type of rectifier such as half-wave rectifier circuit like in figure 5.1, center tap full-wave rectifier circuit like in figure 5.2 and full-wave bride rectifier like in figure 5.3, every circuit are given the different type of output voltage supply and different type of output wave form and this experiment we also get how to use oscilloscope and multimeter better. This experiment we also know with is the best rectifier. And the best rectifier is full-wave rectifier. Part B From both experiment we can conclude the diode can become insulator when in reverse biased and also can be a conductor when in forward biased because that?s time the resistance become low and can make the current easily flow trough diode. In this experiment also we know the how to differentiate the clipping circuit and clamping circuit just look at the circuit for example the clipping circuit the load is in series with the diode and the clamping circuit is the load is parallel with the diode. This experiment we know the clipping and clamping circuit are function to cut the signals peak. ________________ REFERENCE Internet * http://sleepycity.net/troublemakers/diodehttp: * http://www.electronickitsbychaneyelectronics.com * http://penang.i-learn.uitm.edu.my * http://www.scribd.com/ * http://nuclearpowertraining.tpub.com/ * http://metroamp.com/wiki/ * http://www.allaboutcircuits.com Books * Laboratory manual * Fundamentals of electric circuit ...read more.