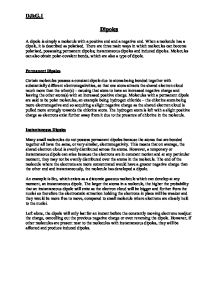 Dipoles and their importance

Dipoles A dipole is simply a molecule with a positive end and a negative end. When a molecule has a dipole, it is described as polarised. There are three main ways in which molecules can become polarised, possessing permanent dipoles; instantaneous dipoles and induced dipoles. Molecules can also obtain polar-covalent bonds, which are also a type of dipole. Permanent Dipoles Certain molecules possess a constant dipole due to atoms being bonded together with substantially different electronegativities, so that one atom attracts the shared electron cloud much more than the other(s) - causing that atom to have an increased negative charge and leaving the other atom(s) with an increased positive charge. Molecules with a permanent dipole are said to be polar molecules, an example being hydrogen chloride - the chlorine atom being more electronegative and so acquiring a slight negative charge as the shared electron cloud is pulled more strongly towards the chlorine atom. ...read more.

Left alone, the dipole will only last for an instant before the constantly moving electrons readjust the charge, cancelling out the previous negative charge or even reversing the dipole. However, if other molecules are present near to the molecules with instantaneous dipoles, they will be affected and produce induced dipoles. Induced Dipoles When an unpolarised molecule such as Cl2 comes into close proximity with a polar molecule such as HCl, the unpolarised molecule may have a dipole induced in it. The dipole attracts or repels electrons in the charged electron cloud of the unpolarised molecule, inducing a dipole. For example, an unpolarised Cl2 molecule would be affected when near the polar HCl molecule, the hydrogen atom has a slight positive charge and attracts electrons to that end, from the Cl2 molecule. When electrons are attracted to the positive end of the HCl dipole, the chlorine atom near the HCl molecule acquires a slight negative charge, leaving the other chlorine atom with a slight positive charge; a dipole has been induced in the molecule. ...read more.

Jolly and requires research into. The importance of dipoles The occurrence of dipoles is of critical importance to support human life. Dipoles give different liquids (the most abundant atom-economically physical phase in terms of molecular quantity) different and varied qualities which gives rise to the ability to react in a multiplicity of manners. In additions to different types of dipoles forming between different molecules in different and varied permutations, differences and variation also arises as the result of a differing relative strength of dipoles. The order of relative dipole strength in qualitative terms The strongest type of dipole is the hydrogen bond. Following on from this, the next strongest dipole type is the permanent dipole - permanent dipole bond. Following on from this type of dipole, is the permanent dipole - induced dipole bond. And finally, the weakest of these dipoles in purely relative terms, is the instantaneous dipole - induced dipole bond. The polar-covalent dipole slots between the hydrogen bond and the instantaneous dipole - induced dipole bond depending on the conditions and reagents (molecules) involved. ?? ?? ?? ?? DJkG.1 ...read more.