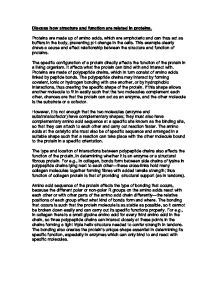 Discuss how structure and function are related in proteins.

Discuss how structure and function are related in proteins. Proteins are made up of amino acids, which are amphoteric and can thus act as buffers in the body, preventing pH change in the cells. This example clearly draws a cause and effect relationship between the structure and function of proteins. The specific configuration of a protein directly affects the function of the protein in a living organism. It affects what the protein can bind with and interact with. Proteins are made of polypeptide chains, which in turn consist of amino acids linked by peptide bonds. The polypeptide chains may interact by forming covalent, ionic or hydrogen bonding with one another, or by hydrophobic interactions, thus creating the specific shape of the protein. ...read more.

The type and location of interactions between polypeptide chains also affects the function of the protein, in determining whether it is an enzyme or a structural fibrous protein. For e.g., in collagen, bonds form between side chains of lysine in polypeptide chains lying next to each other---these cross-links hold many collagen molecules together forming fibres with added tensile strength; thus function of collagen protein is that of providing structural support (as in tendons). Amino acid sequence of the protein affects the type of bonding that occurs, because the different polar or non-polar R groups on the amino acids react with each other or with other parts of the amino acid chain differently---the relative positions of each group affect what kind of bonds form and where. ...read more.

The bonding also creates the protein's unique shape essential in determining its specific function, especially in enzymes which can only bind to and react with specific molecules. Configuration of the protein also affects its solubility, which affects the medium in which it is carried and thus the role it plays in the body. For example, globular proteins tend to curl up so their non-polar, hydrophobic side chains point to the center and the hydrophilic side chains remain on the outside---this makes them soluble and allows them to be transported in the blood, e.g. haemoglobin carries oxygen to respiring cells all over the body via blood vessels. Proteins may sometimes contain prosthetic groups which aid in their function, e.g. haemoglobin contains haem groups which bind to oxygen which the protein is supposed to transport. In conclusion, the structure of proteins provide the conditions and/or limitations which gives the proteins their unique function(s) in organisms. Vera Goh 2S03C 29/1/03 ...read more.