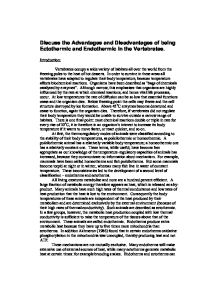 Discuss the Advantages and Disadvantages of being Ectothermic and Endothermic in the Vertebrates.

Discuss the Advantages and Disadvantages of being Ectothermic and Endothermic in the Vertebrates. Introduction: Vertebrates occupy a wide variety of habitats all over the world from the freezing poles to the heat of hot desserts. In order to survive in these areas all vertebrates have adapted to regulate their body temperature, because temperature affects biochemical reactions. Organisms have been described as "bags of chemicals catalysed by enzymes". Although narrow, this emphasises that organisms are highly influenced by the rate at which chemical reactions, and hence vital life processes, occur. At low temperatures the rate of diffusion can be so low that essential functions cease and the organism dies. Below freezing point the cells may freeze and the cell structure destroyed by ice formation. Above 45oC enzymes become denatured and cease to function, again the organism dies. Therefore, if vertebrates did not regulate their body temperature they would be unable to survive outside a narrow range of habitats. There is one final point: most chemical reactions double or triple in rate for every rise of 10oC, it is therefore in an organism's interest to increase its body temperature if it wants to move faster, or react quicker, and so on. At first, the thermoregulatory modes of animals were classified according to the stability of their body temperatures, as poikilothermic or homeothermic. A poikilothermic animal has a relatively variable body temperature; a homeothermic one has a relatively constant one. These terms, while useful, have become less appropriate as our knowledge of the temperature-regulatory capacities of animals has increased, because they communicate no information about mechanism. For example, mammals have been called homeotherms and fish poikilotherms. But some mammals become torpid at night or in winter, whereas many fish live in water of constant temperature. These inconsistencies led to the development of a second level of classification - endotherms and ectotherms. All living creatures metabolise and none are a hundred percent efficient. ...read more.

Often with lizards the body temperature may only vary by a few degrees. The "activity temperature range" (ATR) is the range of body temperatures at which a species carries out its normal activities. The advantage of limiting body temperature to a narrow range during activity is that it simplifies the integration of internal processes. This is an important benefit, which can be reached by ectothermy or endothermy. In both, for example, activity within the ATR yields a maximisation of oxygen consumption and a plateau in resting oxygen consumption (i.e. resting metabolic rate does not vary with body temperature within the ATR, whereas active metabolic rate is at a maximum). This increases energy efficiency. However in endotherms the ATR is narrower and the integration of biochemical processes hence more advanced. The ectothermic way of life is not, therefore, inferior to that of endotherms, it simply represents a slower low-energy-flow approach that has its own distinct advantages. Disadvantages of Ectothermy: However there are certain costs to the ectothermic approach. Ectotherms can only regulate their body temperature if the environment is permissive of such regulation. If it is not sunny lizards cannot warm up and must remain inactive. The ectothermic metabolism allows only brief periods of high activity, because the low rate of aerobic respiration in ectotherms leads to the quick development of oxygen debt due to anaerobic respiration (often anaerobic respiration can account for 50-98% of energy production during activity). Endotherms, by contrast, are able to reach far greater speeds for longer than equivalent sized ectotherms, because they are able to aerobically respire at a much greater rate. As a result many ectotherms rely on camouflage for defence. The low rate of metabolism also restricts the possibility of attaining large size. This is why there are few ectotherms that weigh over 100 kg whereas ten percent of mammals do. The result is that ectotherms are far more reliant on their physical environment than endotherms. ...read more.

Both endothermic and some ectothermic animals (mammals and certain lizards) are known to produce fevers. Experiments have shown that fevers increase the survival rates of certain lizards, but it is not yet known why. Conclusion: Endothermy and Ectothermy represent a metabolic dichotomy affecting far more than body temperature. The implications of both modes of existence extend to such areas as activity, physiology and behaviour. Endothermy and ectothermy each have their own strengths and weaknesses, and neither is mechanistically less complex than the other. Some ectotherms are capable of regulating their body temperature around a variable fixed point, depending on the level of activity required. This has the advantage of fuel economy, because it is generally reliant on 'free' sources of energy. Endothermy and ectothermy also offer animals different advantages in different climates. In the tropics ectotherms can compete successfully with, or even outcompete, mammals both in abundance of species and in numbers of individuals because of the warm climate (that allows ectotherms to be active at night as well as day) and greater energy economy enjoyed by ectotherms. The energy they save from not maintaining an elevated body temperature can be diverted to reproduction and increasing biomass. In moderate to cold climates, however, the ectotherms are slower, are thus less competent as predators and are generally less successful than mammals. Near the poles, for example, there are no ectotherms only endotherms, because the endotherms' tissues are kept warm. The above examples have shown that there is no real example of a true endotherm or a true ectotherm, only degrees in between the two ideals. A true ectotherm is reliant totally on the physical environment for heat energy, and this environment is therefore to them primarily important. A true endotherm can maintain a constant body temperature totally independent of the physical environment, but at the cost of increased metabolism requiring extra food; to the endotherm the biological environment is primarily important. These two cases demonstrate the particular characteristics and difficulties with the two modes of life. As has been shown, neither is more advantageous than the other, overall, although one may enjoy local benefits. ...read more.