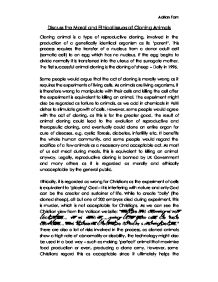 Discuss the Moral and Ethical issues of Cloning Animals

Discuss the Moral and Ethical issues of Cloning Animals Cloning animal is a type of reproductive cloning, involved in the production of a genetically identical organism as its 'parent'. This process requires the transfer of a nucleus from a donor adult cell (somatic cell) to an egg which has no nucleus. If the egg begins to divide normally it is transferred into the uterus of the surrogate mother. The first successful animal cloning is the cloning of sheep - Dolly in 1996. Some people would argue that the act of cloning is morally wrong as it requires the experiments of living cells. ...read more.

Legally, reproductive cloning is banned by UK Government and many others as it is regarded as morally and ethically unacceptable by the general public. Ethically, it is regarded as wrong for Christians as the experiment of cells is equivalent to 'playing' God - it is interfering with nature and only God can be the creator and sustainer of life. While to create 'Dolly' (the cloned sheep), all but one of 200 embryos died during experiment, this is murder, which is not acceptable for Christians. As we can see the Christian view from the Vatican website: "Therapeutic cloning is not acceptable... it is illicit.....using adult stem cells are more desirable... ...read more.

It is no more 'playing God' than other fertility treatments such as IVF and it might help to improve the human race and speed up the process of evolution. Some Christians might not find it as murder since the experiment involves just a ball of cells, so it's not murder to discard them. For Islam, the Muslims regard all animal cloning is wrong. This can be seen from the publication from the University of Cairo, "Cloning is prohibited and we must oppose it and prevent it by all means." Again, they regard this as an act that subverts the role of Allah alone in creating life, for "It is He who gives life and He who takes it away" (Qur'an). ?? ?? ?? ?? Adrian Tam ...read more.

Response to the question overall is okay, and considers a number of viewpoints on the topic, but the gain higher marks, the essay needs more balance and scientific depth. The essay is presented mostly in a concise and clear way ...

Response to the question overall is okay, and considers a number of viewpoints on the topic, but the gain higher marks, the essay needs more balance and scientific depth. The essay is presented mostly in a concise and clear way but in parts the sentences are waffly and could be made more concise or clearer. The essay also needs a conclusion.

The introduction is good and sets out what is to come in the rest of the essay but I would have liked to have seen either a diagram explaining the science behind cloning or a bit more depth to the text before launching into the different arguments about it. The main body of the text also concentrates too much on religious arguments and could be more widespread to include broader opinions on the topic. Positives should also be included for cloning ethically to being balance to the essay overall. A conclusion is needed. I would have expected the science to have been at slightly greater depth for this level.

Spelling and punctuation are fine but the grammar is incorrectly worded in places making the sentences harder to read.