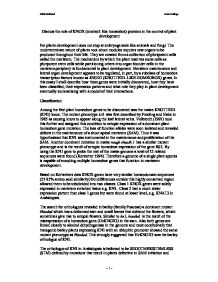 Discuss the role of KNOX (knotted1 like homeobox) proteins in the control of plant development For plants development does not stop at embryogenesis like animals and fungi. The underterminate nature of plants root-shoot modules requires new organs to be produced throughout their life. They are created from a collection of pluripotent cells called the meristem. The mechanism by which the plant reserves some cells as pluripotent stem cells while partitioning others into organ founder cells in the meristem periphery is fundamental to plant development. Meristem maintenance and lateral organ development appears to be regulated, in part, by a subclass of homeobox transcription factors known as KNOX1 (KNOTTED1-LIKE-HOMEOBOX) genes. In this essay I shall describe how these genes were initially discovered, how they have been classified, their expression patterns and what role they play in plant development eventually summarising with a model of their interactions. Classification Among the first plant homeobox genes to be discovered was the maize KNOTTED1 (KN1) locus. The mutant phenotype kn1 was first described by Freeling and Hake in 1985 as causing knots to appear along the leaf lateral veins. Volbrecht (1991) took this further and assigned this condition to ectopic expression of a dominant plant homeobox gene mutation. ...read more.

It has been shown that KNAT1 is responsible for the redundancy of the stm as1 mutants, this is not surprising since STM and KNAT1 are the more closely related of the class 1 KNOX1 genes in Arabidopsis sharing 44% overall similarity with 70% in the homeodomain. The evolutionary implications of this are interesting. Presumably both genes arose from a duplication but whether the ancestral gene had AS1 inhibition first which KNAT1 subsequently lost or it is a function that STM has gained has not been proven although the former appears more plausible as repression of AS1 is vital in the meristem. The search for a regulator of STM has been inconclusive there has work performed using differing auxin concentrations (Reinhardt et al 2000). Auxin transport was blocked either genetically or via the use of inhibitors in the SAM which failed to produce lateral organs and there was low expression of STM like genes. When auxin was applied directly to the SAM leaf primordia developed at the site of application. Limited epistasis experiments have suggested that CUP-SHAPED-COTYLEDON (CUC) activity promotes STM expression (Aida and Takada et al 2001). stm mutants have partially united cotyledons like those of cuc1 and cuc2, CUC genes might act partly via STM to repress lateral organ development. ...read more.

Given this data they inferred that a complex leaved based common ancestor had complex primordia with early KNOX1 expression and that simple leaves evolved either through turning off KNOX1 in the primordia or by modifying secondary morphogenesis. The evolutionary history of the KNOX1 genes has only been touched upon so far although there is little information that is available. Sufficed to say that it is believed that the KNOX1 genes arose though a single common ancestor and have since duplicated. This can be seen in Arabidopsis where KNAT2 and KNAT6 are located within segmental chromosomal duplications. There is also evidence of very high conservation of the homeobox domain, which is not surprising considering they are transcription factors with DNA binding domains. Discussion KNOX1 genes have been shown to be instrumental in the maintenance and proliferation of the meristem, through their inhibition pivotal in the formation of a lateral organ (leaf) and also play a role in determining the morphology of the leaves themselves. They exhibit partial redundancy, which while not complete for the plant allows successful elucidation of other roles they play in plant development. There is a lot to be discovered about their regulation and most of what has been shown is based on models but with new techniques such as chimeric proteins and transgenics the answers will not evade us for long. ...read more.