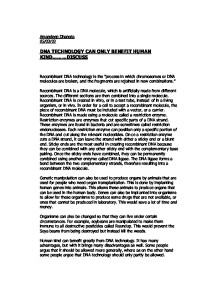 DNA and Technology Can Only Benefit Human Kind. Discuss.

Amandeep Dhanota 05/03/02 DNA TECHNOLOGY CAN ONLY BENEFIT HUMAN KIND.........DISCUSS Recombinant DNA technology is the "process in which chromosomes or DNA molecules are broken, and the fragments are rejoined in new combinations." Recombinant DNA is a DNA molecule, which is artificially made from different sources. The different sections are then combined into a single molecule. Recombinant DNA is created in vitro, or in a test tube, instead of in a living organism, or in vivo. In order for a cell to accept a recombinant molecule, the piece of recombinant DNA must be included with a vector, or a carrier. Recombinant DNA is made using a molecule called a restriction enzyme. Restriction enzymes are enzymes that cut specific parts of a DNA strand. These enzymes are found in bacteria and are sometimes called restriction endonucleases. Each restriction enzyme can position only a specific portion of the DNA and cut along the relevant nucleotides. Once a restriction enzyme cuts a DNA strand, it can leave the strand with either a sticky end or a blunt end. Sticky ends are the most useful in creating recombinant DNA because they can be combined with any other sticky end with the complementary base pairing. Once the sticky ends have combined, they can be permanently combined using another enzyme called DNA ligase. The DNA ligase forms a bond between the two complementary strands, therefore resulting into a recombinant DNA molecule. Genetic manipulation can also be used to produce organs by animals that are used for people who need organ transplantation. ...read more.

Another advantage includes, cloning cows that produce more meat and less fat. This would decrease the prices of meat and the turnover of the farmers could rise. This would be an advantage for consumers and for the government, as this would stimulate the demand for jobs, as a result decreases the unemployment figures. This would e beneficial to many people, and because prices for food will decrease people would have more freedom in spending their money. Once this 'super cow' is produced, cloning would make it possible to produce large quantities. These cows will produce much more and farms will grow. As a result, profit will increase and more taxes can be paid, and society would benefit largely. It is also possible to improve the environment with genetic manipulation. This could be done by cloning endangered species or by creating organisms that prevent pollution. By cloning bacteria that is already in the environment that has helped against water pollution, could released in National Parks or in large rivers to prevent pollution. Another way of improving the environment is by cloning endangered species like elephants or pandas. This would prevent the species from being extinct. This is a good application, although environmental organisations are against cloning. If allowed to experiment with genetic engineering, it would become possible to start all kinds of research related to DNA. We would learn a lot about life. Knowledge gained this way can be applied to the advantage of individuals and the society as a whole. There are also many disadvantages to using recombinant DNA technology. ...read more.

However people in favour of recombinant DNA technology believe that man has influenced these situations. In January European and United Nation organisations pleaded for a legal ban on cloning of animals and plants. Not everyone was in support of such a ban. When president Clinton found out that a sheep in Scotland was successfully cloned he banned the use of government money for the cloning of man. A national committee on bio- ethics proposed to ban the cloning of man by law, this is because of the moral dilemmas and the medical risks. Most people believe that recombinant DNA technology should be allowed if certain rules set by the government are respected. We are hesitant to allow the use of gene-passport. We believe this to be intrusion of privacy. However people should be more informed about DNA/genetic manipulation. It should be possible to have genes examined; nevertheless the resulting information should be kept private. We are in favour of genetic manipulation for use in industry. Many useful products can be produced this way, however the application should be done carefully. In health care we believe that this process is very useful. The organ transplantation problem can be solved, production of insulin is much more cheaper. On the whole we believe that DNA technology should be permitted in general. As it benefits human kind in many ways. However should be kept under control. This can be done if the government licences a policy. The negative reactions of people can be blamed on the complexity of recombinant DNA techniques. The technology is difficult to understand so there is a fear of the unknown. ...read more.