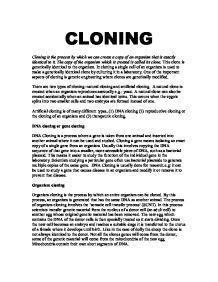 CLONING Cloning is the process by which we can create a copy of an organism that is exactly identical to it. The copy of the organism which is created is called its clone. This clone is genetically identical to the organism. In cloning a single cell of an organism is used to make a genetically identical clone by culturing it in a laboratory. One of the important aspects of cloning is genetic engineering where clones are genetically modified. There are two types of cloning: natural cloning and artificial cloning. A natural clone is created when an organism reproduces asexually e.g.: yeast. A natural clone can also be created accidentally when an animal has identical twins. This occurs when the zygote splits into two smaller cells and two embryos are formed instead of one. Artificial cloning is of many different types, (1) DNA cloning (2) reproductive cloning or the cloning of an organism and (3) therapeutic cloning. DNA cloning or gene cloning DNA Cloning is a process where a gene is taken from one animal and inserted into another animal where it can be used and studied. Cloning a gene means isolating an exact copy of a single gene from an organism. Usually this involves copying the DNA sequence of that gene into a smaller, more accessible piece of DNA, such as a bacterial plasmid. ...read more.

Although most sheep live to the age of 11 and 12 she died early. The postmortem indication indicated that she was quite normal apart from her cancer and arthritis. She was famously cloned by Dr. Ian Wilmut of the rosin institute, Edinburgh, Scotland. She was the first sheep to be cloned after 276 unsuccessful attempts .Dr. Wilmut himself isn't ruling out that Dolly's arthritis was a symptom of her cloning origins. Dolly also had many problems with weight; she was very overweight and constantly on drugs. Her death reopens the debate on cloning and its problems. She is the worlds most famous cloned animal. The advantages of cloning 1. Therapeutic cloning can solve the problems of many people who have defective organs or problems with their organs like lungs, liver, etc. by using stem cells to grow organs. Human clones can also be created to donate their organs. To prevent rejection of the new organs the cells used to generate stem cells and grow the organs can be taken from the patients themselves. 2. Couples who can't have children due to sterility or other reasons can still have children who resemble them and are genetically identical to them through cloning. Even if the woman is sterile she can still have the child from her body if the scientists implant the embryo in her uterus. ...read more.

They will be considered as a person's property and may even be sold .It will be unethical to sell humans even if they are cloned humans. 11. People may abuse cloning technology to do illegal and immoral things by creating clones for their own purposes. 12. If a child was cloned and became disfigured due to some error the parent's dreams will be shattered and they would have to try and get a child by cloning an embryo again. This way thousands of embryos will be destroyed. This is also the case with animal cloning. Researchers believe that it is unethical to destroy embryos that will eventually form children. e.g.: a cloned cow recently died weeks after its birth with a huge abnormality in blood pressure. The same could happen to human clones leading to questions over the ethics of cloning. Conclusion Cloning has both its advantages and disadvantages. I am not opposed to further research into human cloning to find out whether it will be possible to clone humans or not. I also feel that additional research should be done for animal cloning to see whether it should be continued. I am still not sure about the plans to start cloning humans. I fell that without doing proper research into the problems that are there in cloning and solving the problems we shouldn't start cloning humans. All information for this work was taken from: http://english.people.com.cn/200108/01/eng20010801_76227.html http://www.newscientist.com/hottopics/gm/ http://www.globalchange.com/clonlink.htm http://www.ornl.gov/sci/techresources/Human_Genome/elsi/cloning.shtml http://www.humancloning.org/ http://gslc.genetics.utah.edu/units/cloning/ The examples were taken from: http://www.newscientist.com/hottopics/cloning/ http://www.ornl.gov/sci/techresources/Human_Genome/elsi/cloning.shtml http://www.humancloning.org/ http://english.people.com.cn/200108/01/eng20010801_76227.html ...read more.