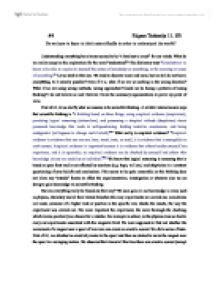 Do we have to learn to think scientifically in order to understand the world?

Do we have to learn to think scientifically in order to understand the world?

Understanding everything has always seemed to be “a hard nut to crack” for our minds. What do we really accept as the explanation for the word “understand”? The dictionary says “Understand- to know or be able to explain to yourself the nature of somebody or something, or the meaning or cause of something.I” Let us stick to that one. We tend to discover more and more, but we still do not know everything. Is it actually possible? Even if it is, what if we are we seeking in the wrong direction? What if we are using wrong methods, wrong approaches? Could we be facing a problem of wrong thinking? I do not believe so and I believe I have the necessary argumentation to prove my point of view.

First of all, let us clarify what we assume to be scientific thinking. A reliable internet source says that scientific thinking is “a thinking based on three things: using empirical evidence (empiricism), practicing logical reasoning (rationalism), and possessing a skeptical attitude (skepticism) about presumed knowledge that leads to self-questioning, holding tentative conclusions, and being undogmatic (willingness to change one's beliefs).II” What really is empirical evidence? “Empirical evidence is evidence that one can see, hear, touch, taste, or smell; it is evidence that is susceptible to one's senses.

Nevertheless, people distinguish a more complex world, a world of our inner selves- the world of human, human behavior. Many tend to say that there is nothing one can measure in this world, no values etc. The argument for this is that human behavior is based on emotions. That is true but what are emotions? The encyclopedia states “Emotion- in psychology it signifies a reaction involving certain physiological changes, such as an accelerated or retarded pulse rate, the diminished or increased activities of certain glands, or a change in body temperature, which stimulate the individual, or some component part of the individual's body, to further activity. The three primary reactions of this type are anger, love, and fear, which occur either as an immediate response to external stimuli or are the result of an indirect subjective process, such as memory, association, or introspection.IV

Furthermore, this applies to areas, such as religion, that we have not been able to explain scientifically yet- we do not have found the right methods to prove does or does not god or Allah or the sacred Buda actually exist, basically because no one can tell us where to find them- where to check their presence, which makes the religion so unacceptable to many- “We need proof!”. Then there is the question “Is or is universe not infinite?”- we might develop the methods for checking this e.g. making a probe that could fly at a speed at least equal to that of light, so we could see hat is further than our telescopes can reach. But how would we receive data from such a probe, how can we build such a probe? So we see that the methods exist, but we do not have the ability to carry out the experiments.

It is now obvious that scientific thinking not only can but does provide us answers to the questions about world. It does not give answers to all questions but it does answer a lot of them, or at least has theoretical possibilities of doing so. However, in order to understand the world we have to think scientifically.