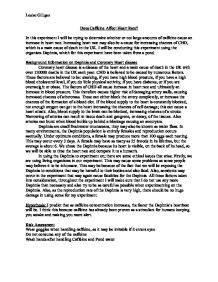 In this experiment I will be trying to determine whether or not large amounts of caffeine cause an increase in heart rate. Increasing heart rate may also be a cause for increasing chances of CHD, which is a main cause of death in the UK. I will be conducting this experiment using the organism Daphnia, which for this experiment have been taken from a pond.

Coronary heart disease is a disease of the heart and a main cause of death in the UK with over 120000 deaths in the UK each year. CHD is believed to be caused by numerous factors. These factors are believed to be: smoking, if you have high blood pressure, if you have a high blood cholesterol level, if you do little physical activity, if you have diabetes, or if you are overweight or obese. The factors of CHD all cause increase in heart rate and ultimately an increase in blood pressure. This therefore causes higher risk of damaging artery walls, causing increased chances of atheromas. These can either block the artery completely, or increase the chances of the formation of a blood clot. If the blood supply to the heart is constantly blocked, not enough oxygen can get to the heart increasing the chances of cell damage; this can cause a heart attack. Also, blood supply to the brain can be blocked, increasing chances of a stroke. Narrowing of arteries can result in tissue death and gangrene, or decay, of the tissues. Also arteries can burst when blood builds up behind a blockage causing an aneurysm.

Daphnia are small freshwater crustaceans, they may also be known as water fleas. In many environments, the Daphnia population is entirely females and reproduction occurs asexually. Under optimum conditions, a female may produce more than 100 eggs each nesting. This may occur every 3 days. A female may have as many as 25 broods in its lifetime, but the average is about 6. We chose the Daphnia because its heart is visible, on the back of its head, so we will be able to time the heart rate and compare it to a human's.

In using the Daphnia to experiment on; there are some ethical issues that arise. Firstly, we are using living organisms in our experiment. This may cause some problems as some people may believe it to be inhumane. This may be because of the fact that we will be exposing the Daphnia to conditions that may be harmful to their bodies and also fatal. Also, accidents may occur in the experiment that may again cause fatalities for the Daphnia. All these factors taken into consideration, throughout the experiment I will make sure that I do not use any more Daphnia than necessary and also try to be as careful as possible when experimenting on the Daphnia. Also, as the reproduction rate of the Daphnia is very high, there should be no huge damage in using some for my experiment.

Hypothesis: I predict that as caffeine concentration increases, the faster the Daphnia’s heartbeat will be. I think this because caffeine has already been proven as a stimulant for humans keeping you awake and making you more alert.

Wear goggles when handling caffeine, as it may be irritable if it enters eyes

Do not consume any of the caffeine

For the preliminary experiment, we will be counting the Daphnia’s heartbeat for 10 seconds. The preliminary will be carried out on Daphnia taken from their natural habitat of pond water to see what the Daphnia’s heart rate would be under normal circumstances. This will give us an idea of how much Caffeine intake will affect heart rate as it will give us a result for comparison with the rest of the results.

After 5 minutes, transfer daphnia from beaker to microscope slide

After 10 seconds, stop the timer

Repeat for all concentrations of caffeine.

As a class, we decided to share our results in order to compare them and test the reliability of our own results. Also, it would create a clearer pattern of continuous data, therefore showing that if the results are similar, our results would be more reliable on the effects of caffeine on the daphnia’s heart.

From my results I can see that Caffeine does in fact raise the heart rate of the Daphnia. This also supports my hypothesis as it is clear there is a rise in the heart rate as the concentration of caffeine increased. This may therefore suggest a relationship between the living organism that is the Daphnia and Human beings. Caffeine has already been proven as a stimulant which has the capability to make a person feel more alert after consumption. This is thought to be because it stimulates the adrenal gland, therefore making you feel more awake and also blocks the connection to the adenosine hormone which would normally make you feel drowsy by slowing down nerve cell activity. My experiment suggests that as there is with Daphnia, there is an increase in heart rate, there is a higher chance of increased heart rate in humans. This is dangerous for human beings as increased heart rate can cause numerous other problems in the body. Firstly, the increase in heart rate will mean blood is being pumped around your body at a faster rate. This increases the chance of damage to veins and arteries, therefore increasing your chances of having atherosclerosis; which occurs due to damage to artery walls and the build up of hard plaque in the arteries, this then reduces the elasticity of the wall and increases the chances of heart attack. People can also become dependent on caffeine, therefore meaning they consume large amount per day, increasing chances of hypertension, again increasing the risk greatly of cardio vascular disease. Therefore, to maintain a healthy lifestyle and reduce your risk of cardio vascular disease, it seems as though it would be most beneficial to avoid caffeinated foods and drinks. This will ultimately benefit you as there is a decreased chance of a high heart rate and also therefore decreasing the chances of having problems with your heart.

In gaining the results of my experiment, I had to use the fairly inaccurate method or simply counting and dotting on paper the number of heartbeats per 10 seconds produced by the Daphnia. This was firstly inaccurate as there was the problem of human error. This may have occurred with the counting of the heart beats. This may have happened firstly in miscounting the amount of heartbeats as it was difficult to record every one, therefore making the results inaccurate. Also, as only one person could look down the microscope at each time, the results relied only upon that one person. In some circumstances, this person may have made errors, and as no other member of the group saw the number of heartbeats, we had to rely only upon their counting. Also, in the experiments and repeats, we had to change the Daphnia used as sometimes, accidents occurred and daphnia needed to be replaced. This therefore made the results less reliable as changing the daphnia meant that there would be differences in the experiment and reducing the reliability of my results. Also, random errors may have occurred in certain stages of the experiment therefore, which again would be likely to have been caused by human error in one stage and could not be repeated. This therefore would decrease the number of results, making our experiment seem less reliable. Systematic errors also occurred throughout the experiment. This may have been if the daphnia died due to too much caffeine consumption, therefore meaning the daphnia had to be replaced, therefore making my results less reliable.

However, my results show that all the group’s results were quite similar, therefore strengthening the reliability of the results and supporting my hypothesis. This also supports the idea that even thought there were likely to be errors in my experiment, for most of it; I would have carried it out correctly as it is highly unlikely that all groups would have carried out the experiment incorrectly. In combining my group results with the class as it gives a sufficient amount of results to create the conclusion that caffeine consumption does in fact raise heart rate, which for your overall health is not beneficial, and ultimately increases the risk of you having cardio vascular disease.