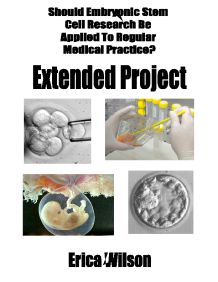 CONTENTS ABSTRACT - PAGE 3 INTRODUCTION - PAGE 4 DISSERTATION PUBLIC OPINION - PAGE 6 LAW AND POLITICS - PAGE 7 RELIGION - PAGE 8 MORALITY AND ETHICS - PAGE 9 MEDICAL POTENTIAL - PAGE 10 ALTERNATIVES - PAGE 12 DISADVANTAGES - PAGE 13 CONCLUSION - PAGE 14 BIBLIOGRAPHY - PAGE 15 EVALUATION - PAGE 16 APPENDIX - PAGE 17 * ACTIVITY LOG * LIT PRO FORMAS (FOR EACH SOURCE) * PRESENTATION (EG. SLIDES FROM POWERPOINT) WITH NOTES ABSTRACT Scientists have been experimenting with and studying stem cells for about a century now - the first adult stem cells were discovered in 1908 by a Russian histologist, Alexander Maksimov. However, embryonic stem cells were only derived from mice embryos in 1981 and from human embryos in 1998. Since then research has been progressing slowly, and this is because of pressure from pro-life and religious groups with arguments that using embryonic stem cells for the purpose of research is unethical and immoral because it involves extracting the stem cells from the embryo, which destroys the embryo. The aims of my project are to investigate stem cell research and how it has developed over the last few decades. I want to find out if the advantages outweigh the disadvantages, the success and failures of human trials and arguments for and against the morality of stem cell research. Finally, I will draw a conclusion as to whether I believe stem cells should be applied to regular medical practice. I will mainly use the Internet to gather my research sources, but I will also use newspaper and magazine articles. I have a contact who is involved with stem cell research so I will gather statements from her. So, my clear objectives are these: * Research the advantages of stem cells, such as successful trials * Research the disadvantages of stem cells such as unsuccessful trials * Learn the different arguments used by people who oppose stem cell research * Learn the different arguments used by people who ...read more.

The sanctity of life is a religious idea closely linked to Christianity. It is the belief life is precious and should be valued. Christians believe the destruction of an embryo for stem cell research is violating the sanctity of life, since life starts at conception. It also breaks the Sixth Commandment, which states "Thou shalt not murder". In addition, the Bible encourages us to look after each other; 'We are to love our neighbours as ourselves' and 'Jesus taught that a stranger in trouble was our neighbour'. Here the implication is that the stranger in trouble is an embryo being used for research purposes. MORALITY AND ETHICS Although everything in this project is basically about the morality and ethics of stem cell research, there are some very specific ethical and moral issues. One of the most well-known ethical debates is the 'moral status of a human embryo'. After Obama was elected and reversed the veto on embryonic stem cell research, allowing more government funding to be put into embryonic stem cell research, there was much outcry from the opposition. But one pro-life group went to the extreme. They compared Obama 'enslaving' embryo's by freezing them to that of the Nazi's treatment of the Jews during the Holocaust. They have been pressuring judges to act and even filed a lawsuit saying Obama is "treating human embryos, and, thus, human beings as property" that "may be donated for use and destruction in federally-funded [research] without the consent of and against the will of the embryos themselves". They believed embryo's should have the same human rights as everyone else and be protected against abuse. Anthony Ozimic, political secretary of the Society for the Protection of Unborn Children, writes in The New Statesman about how all humans have the capacity to have opinions, feelings and rationality. Embryos count as undeveloped humans, but humans nonetheless and therefore have the capacity to express these feelings, but not the ability to exercise those feelings. ...read more.

It is clear embryonic stem cells have so much medical potential. Scientists have claimed it could help treat many, many previously incurable illnesses, for example Alzheimer's, Parkinson's and Paralysation. With more research we could uncover many other things stem cells are capable of, opening more doors in the medical corridor in our battle to overcome such terminal diseases. However, the side against stem cell research make comments about alternative adult stem cells, which they claim could be used instead since they have crated all the current miracle cures using stem cells. As much as this is true, since all trials using embryonic stem cells have not yet reached human testing, it is only this way because research on adult stem cells in almost 40 years ahead of embryonic stem cells. So with more research put into embryonic stem cells, the hope is they will catch up and exceed the current success of adult stem cells. As for morality, Ozimic is right in his argument that we have no right to deem embryo's less of a human being and take away their moral status. He raises many interesting and thought-provoking questions, which certainly got me thinking very hard, almost swaying me completely. But, I still trust science in that a human embryo hasn't developed a complex nervous system until 2 weeks into development. Since the embryo is destroyed earlier than 2 weeks it has no nervous system and no possible ability to feel pain. And it's not like growing embryos just to destroy them, its embryos from abortions and failed IVF that would've just been thrown away anyway. I am going to conclude with the answer to my question which is yes - I do believe embryonic stem cell research should be applied to regular medical practice. However, only after a lot more research. As a few tests have shown they are unstable and unreliable at present, so a lot more research and testing is needed to perfect these stem cells. After this, I believe they could save hundreds, maybe even thousands of people that previously would have died. ...read more.