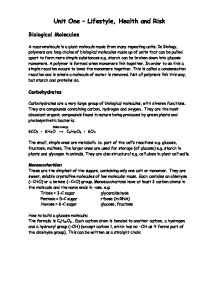 Unit One - Lifestyle, Health and Risk Biological Molecules A macromolecule is a giant molecule made from many repeating units. In Biology, polymers are long chains of biological molecules made up of units that can be pulled apart to form more simple substances e.g. starch can be broken down into glucose monomers. A polymer is formed when monomers link together. In order to do this a simple reaction occurs to bond the monomers together. This is called a condensation reaction and is where a molecule of water is removed. Not all polymers link this way, but starch and proteins do. Carbohydrates Carbohydrates are a very large group of biological molecules, with diverse functions. They are compounds containing carbon, hydrogen and oxygen. They are the most abundant organic compounds found in nature being produced by green plants and photosynthetic bacteria: Solar energy 6CO2 + 6H2O � C6H12O6 + 6O2 The small, simple ones are metabolic i.e. part of the cell's reactions e.g. glucose, fructose, maltose. The larger ones are used for storage (of glucose) e.g. starch in plants and glycogen in animals. They are also structural e.g. cellulose in plant cell walls. Monosaccharides: These are the simplest of the sugars, containing only one unit or monomer. ...read more.

Polysaccharides are formed when many hundreds of monosaccharides condense (join) to form chains. The chains formed may be: * Variable in length * Branched or unbranched * Folded - ideal for energy storage * Straight or coiled The most important polysaccharides are made from many hexose units. Polysaccharides are large, insoluble in water and not sweet - making them ideal for energy storage because they exert no osmotic influence and don't easily diffuse out of cells. Upon hydrolysis, polysaccharides are converted into their constituent monosaccharides to be used as respiratory substrates. Starch is made of two carbohydrate polymers: Amylose - a linear molecule that is coiled and Amylopectin - a branching molecule. Amylose makes up 20% and amylopectin 80% of the total starch molecule. Amylose has repeating glucose units in the commonest linkage - ?1-4 glycosidic linkages, just as in maltose. Hydrogen bonds help to make the linear molecules into a helical structure (a coil). Amylopectin has linear stretches and some branches (with ?1-6 links). The overall structure of starch is the fan shaped amylopectin with the coiled amylose tangled in the branches. Glycogen has a very similar structure to that of amylopectin, except that the straight parts are shorter i.e. ...read more.

at one end. If the fatty acid contains the maximum number of hydrogen atoms possible, it is said to be saturated. (CnH2nO2) If however, some adjacent carbon atoms form a double covalent bond (-C=C-), the fatty acid is said to be unsaturated. The simplest molecule is ethanoic acid: A common fatty acid found in lipids is stearic acid: C17H35COOH: NB. This is a saturated fatty acid as all the bonds between the carbons are single bonds. Each fatty acid can join via its carboxylic acid group to one of the -OH groups on the glycerol. If the fatty acid is stearic acid the resulting neutral lipid (or triglyceride) is glyceryl tristearate. The reaction is a special type of condensation reaction known as an esterification reaction: 1 glycerol + 3 fatty acids produce: A triglyceride + 3 waters If only one fatty acid combines, it is called a monoglyceride. Two is a diglyceride, three is a triglyceride. Neutral lipids are often used as energy stores e.g. in adipose cells (animals) or seeds (plants). However, the plant fatty acids are often more unsaturated than those in animals. Unsaturation (double bonds in the carbon chain) leads to a more liquid nature i.e. oils are made of predominantly unsaturated fatty acids. Unsaturated fatty acids are important in the cell membrane structure and help to account for its fluid nature. ...read more.