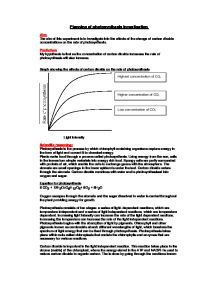 The aim of this experiment is to investigate into the effects of the change of carbon dioxide concentrations on the rate of photosynthesis.

My hypothesis is that as the concentration of carbon dioxide increases the rate of photosynthesis will also increase.

Photosynthesis is the process by which chlorophyll containing organisms capture energy in the form of light and convert it to chemical energy.

Plants make food through a process called photosynthesis. Using energy from the sun, cells in the leaves turn simple materials into energy rich food. Spongy cells are partly surrounded with pockets of air, which enable the cells to exchange gases with the atmosphere. The stomata are small openings in the lower epidermis under the leaf. Carbon dioxide enters through the stomata. Carbon dioxide combines with water and is photosynthesised into oxygen and sugar.

Oxygen escapes through the stomata and the sugar dissolved in water is carried throughout the plant providing energy for growth.

Photosynthesis begins with the absorption of light by pigments. Chlorophyll and other pigments known as carotenoids absorb different wavelengths of light, which broadens the spectrum of light energy that can be fixed through photosynthesis. Photosynthesis takes place within cells called chloroplasts that contain the chlorophylls and enzymes that are necessary for various reactions.

Carbon dioxide is important in the light independent reaction. This reaction takes place in the stroma (matrix) of the chloroplast, where the energy stored in the ATP and NADPH is used to reduce carbon dioxide to organic carbon. The is done by going through the reactions known as the Calvin cycle where one molecule of carbon dioxide enters and combines with a five-carbon sugar called RuBP (ribulose 1,5-biphosphate) to form two molecules of a three-carbon compound called GP (3-phosphoglycerate).

Water will only be used for the control of this experiment instead of NAHCO3. However, there is still some CO2 dissolved in the water. This must be taken account of when taking each reading and should be deducted from the total volume of O2 at that concentration.

The measurements should be taken 6 times so that the results are reliable and that any anomalous results could be ignored. 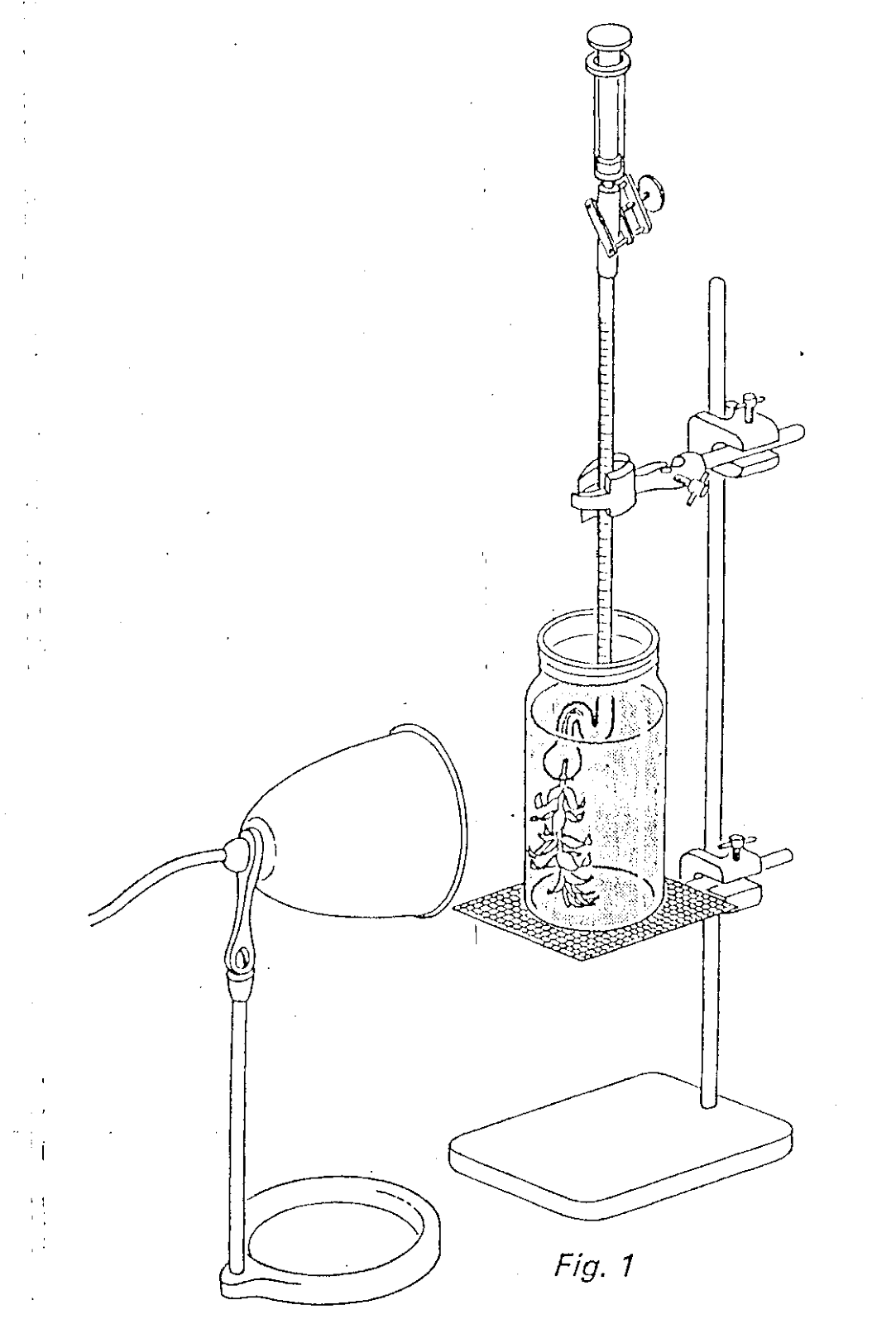 As you will be using a lamp the bulb of the lamp will be hot so effort should be made in order to make sure that you do not touch the light bulb and keep clear from it. Another safety hazard is that water could splash on the bulb and could cause an electric shock and this can be avoided by keeping the water far away from the lamp. An additional safety hazard is the use of razors to cut the Elodea. Using the razor carefully and not walking around with the razor can reduce this.