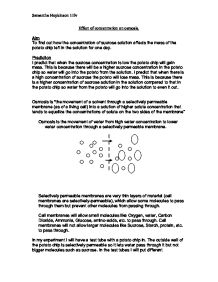 Effect of concentration on osmosis.

Put them in the test tube rack. Then weigh the chips one at a time and record its mass and which solution it will go in so that you will be able to compare the mass before and after. Once they are weighed put them in the correctly labelled test tubes. Then measure out the sucrose for each of the tubes accurately and put it in then measure out the distilled water and put that in. Leave them in a safe place overnight and return to them the following day. Pour away the solution from each test tube and dab dry the chip with a paper tissue. Weigh each of the chips and record the results. Do the same for all the test tubes. I did one trial run before I did it for real. I did not measure the length of the chips but then I decided it would be interesting to see what the effect was on the length. I did not have any big problems in the trial run. My results were as follows: Concentration (mol) Average Mass before (g) Average Mass after (g) Difference (g) 1 2.723 2.193 -0.53 0.75 2.984 2.587 -0.397 0.5 2.34 2.161 -0.179 0.25 2.49 2.514 +0.025 0 2.62 2.789 +0.169 From this I can see that my prediction was correct but I would like to measure the length as well in the real experiment. I found that the concentration of the potato must be between 0.5 and 0.25 as that is where the graph would have crossed 0. Results Table showing mass. ...read more.

Evaluation I think that the experiment could have been improved to give me more accurate results. If I were to do it again I would have more results to take an average of at each level of concentration by having more chips in each test tube. This would make it more accurate as when I had two in a test tube if one of them was a long way out it made the graph not follow the line well when I plotted the averages. There was one anomalous result at 0.5 mol. I think this was because we patted them dry when we got them out of the test tubes as we did not want to weigh there water on the outside of the potato but I think that we may not have dried them all equally so this anomalous result may have been due to it having water left on the outside of it. Also the potato itself was not from the same part of the potato and was not exactly the same size, although I did try to cut them to 36mm each. I could also try the same experiment but with different volumes of cell tissues and see if the percentage change differed with a bigger and smaller surface area. I could now investigate the smaller range near to 0.25 to see the sucrose concentration equivalent to the potato. Finally, I could extend the experiment to a more exact level by looking at the potato cylinders under a microscope, then I would be able to see the cells in greater detail and draw some more observational results. Samantha Hopkinson 11lv ...read more.