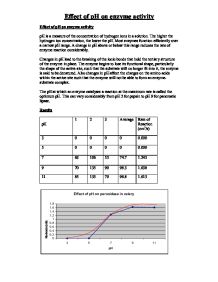 Effect of pH on enzyme activity.

Effect of pH on enzyme activity pH is a measure of the concentration of hydrogen ions in a solution. The higher the hydrogen ion concentration, the lower the pH. Most enzymes function efficiently over a narrow pH range. A change in pH above or below this range reduces the rate of enzyme reaction considerably. Changes in pH lead to the breaking of the ionic bonds that hold the tertiary structure of the enzyme in place. The enzyme begins to lose its functional shape, particularly the shape of the active site, such that the substrate will no longer fit into it, the enzyme is said to be denatured. Also changes in pH affect the charges on the amino acids within the active site such that the enzyme will not be able to form an enzyme-substrate complex. ...read more.

I tried to make the measurements as accurate as possible, however the measuring cylinders went up in intervals of 1mm3 so my measurements were accurate to the nearest mm3. There was also a delay between putting hydrogen peroxide in with the peroxidase solution and placing the bung on top. However I feel the results are reliable enough to make a solid conclusion, as there are no anomalous results. To make sure the pH was not effected I used separate equipment for each pH level instead of rinsing with water as this would effect the pH level. Improvements To improve the results to make them even more accurate and reliable I would next time cut the weigh the amount of celery to be used or either use another source such as jarred horseradish as it can be easily weighed out. I would also use more accurate measuring apparatus such as a large burette. Effect of pH on enzyme activity ...read more.