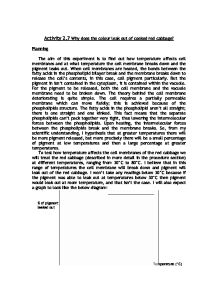 Effect of temperature on cell membranes

Firstly, instead of using a beaker full of heated water, I could have used several water baths, set to the required temperatures. This would be better than using a beaker full of heated water because the water bath's temperature remains almost constant; whilst the beaker full of heated water's temperature changed whilst the cabbage was being cooked, the biggest change being at greater temperatures. Although, the beaker was plastic and prevented heat loss through the sides of the beaker, but the most heat loss was where the water was in contact with the air. Next, my method of cutting out the pieces of cabbage could be altered by using a cork borer. Although in my method I have made efforts to keep the pieces roughly to the same dimensions, the cork borer would have made all pieces to the same dimensions. Also, by using pieces all from the same leaf does it make a fair test? I found that not all the pieces from the same leaf were the same volume or had the same amount of pigment in it/colour to it. To eliminate any problems from this, I could have cut many pieces from several sections of the cabbage and chose the ones I would use by a method of random sampling. In conclusion, my results back up my hypothesis that as temperature increases the percentage of light absorbed increases (or the amount of pigment to leak out will increase), and the graph produced would be S-shaped. The temperature that the cell membrane breaks down is between 60�C and 70�C. ...read more.