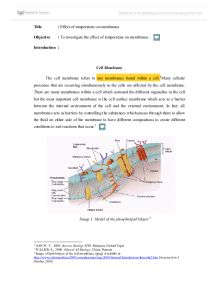 Effect of temperature on membranes

Title : Effect of temperature on membranes Objective : To investigate the effect of temperature on membranes Introduction : Cell Membrane The cell membrane refers to any membranes found within a cell.1Many cellular processes that are occurring simultaneously in the cells are affected by the cell membrane. There are many membranes within a cell which surround the different organelles in the cell but the most important cell membrane is the cell surface membrane which acts as a barrier between the internal environment of the cell and the external environment. In fact, all membranes acts as barriers by controlling the substances which passes through them to allow the fluid on either side of the membrane to have different compositions to create different conditions to suit reactions that occur.2 Image 1: Model of the phospholipid bilayer3 The structure of cell membranes is usually one of a phospholipid bilayer. Other structures which may be formed by the phospholipids are monolayer, micelles and liposome. The cell surface membrane is frequently described by the model of floating proteins in a lipid sea. In 1972, S. Jonathon Singer and Garth Nicholson proposed a fluid mosaic model for the structure of biological membranes. Evidence for this model came from the freeze-fracture technique.4 A piece of plasma membrane is frozen and then split along a plane in the middle of the bilayer. If the inner surface is viewed using an electron microscope, globular structures with similar size as membrane proteins can be seen scattered throughout the plasma membrane. According to this model, the phospholipids, proteins and other components of the membrane are not rigid but for a dynamic and fluid structure. The protein molecules float about freely in the phospholipid bilayer and the proteins together with the phospholipids are free to move sideways within the membrane to give it a fluid characteristic. The mosaic pattern of the plasma membrane is formed by the various proteins built into it. The phospholipid is made of two parts that is the polar hydrophilic (water-loving) ...read more.

The amount of light that passes through the liquid in the cuvette is then measured by the photometer. A voltage signal is sent from the photometer to a display device. The magnitude of this signal is dependent on the amount of light that passes through the liquid in the cuvette. One of the most common uses of a spectrophotometer is the measurement of light absorption. If intensity of colour is linked to the concentration of a substance in solution, then that concentration of that substance can be measured by determining the extent of absorption of light at an appropriate wavelength. Image 3: Spectrophotometer12 Problem Statement: What is the effect of temperature on the permeability of cell membrane? Hypothesis: As temperature increase, the absorbance reading increases indicating a greater permeability of the cell membrane Variables: Manipulated variable: Temperature Responding variable: Absorbance reading which indicates the permeability of cell membrane Constant variable: pH of solution, size and surface area of the beetroot, amount of distilled water used in the boiling tube and time left in the water bath Materials: Beetroot, distilled water Apparatus: Cork borer, white tile, ruler, spectrophotometer, cuvettes, KimWipes, stopwatch, water baths of different temperatures, thermometer, boiling tubes, boiling tube rack, measuring cylinder, forceps, tongs, knife, 250ml beaker Technique: Sections of the beetroot were immersed in 5cm3 of distilled water in different temperatures for 30 minutes. The beetroot sections were then removed and the surrounding solutions are measured for their absorbencies using a spectrophotometer. Procedure: 1. Sections or a single beetroot are cut using a cork borer. Seven 1cm length slices from those sections are measured out using a ruler and cut using a knife on a white tile. 2. The sections are placed in a beaker of distilled water to wash away the excess dye. 3. 5cm3 of distilled water is measured out using a measuring cylinder and poured into seven boiling tubes. ...read more.

the distilled water in the boiling tubes would be the same as the temperature of the water baths it is placed in. The boiling tubes were also shaken before the dye solution was placed into a cuvette to ensure that the dye is evenly distributed throughout the solution. The spectrophotometer was calibrated before the absorbance readings of the dye solutions were taken to ensure that the absorbance reading for clear distilled water is 0AU. This was done by inserting a cuvette 3/4 filled with distilled water into the spectrophotometer and adjusting the instrument to read zero absorbance. As the spectrophotometer is a highly sensitive instrument, specially designed tissue wipes known as KimWipes were used to wipe the clear sides of the cuvette clean before placing the cuvette into the spectrophotometer. This is to remove liquid or residue on the outer surface of the cuvette that may affect the absorbance reading of the dye solution contained in it. For the same reason, it was ensured that the dye solution in the cuvette does not contain any bubbles. The absorbance reading for each temperature was repeated two times and the average absorbance reading for each temperature was calculated to ensure the reliability of the results obtained. Safety Precautions: A lab coat should be worn at all times in the lab to prevent clothes from any stains if any spills occur. Throughout the experiment, care must be taken to ensure that beetroot juice does not spill on the skin or clothes as it will stain very badly. Closed shoes should be worn in the lab to provide adequate protection in case of any mishaps. When cutting the beetroot sections using the knife and cork borer, both these apparatus should be handled with care. Tongs should be used to remove the boiling tube from water baths with higher temperatures to prevent scalding. Conclusion: It can be concluded that as the temperature increase, the absorbance reading increases indicating a greater permeability of the cell membrane. The hypothesis is accepted. ...read more.

A lengthy experimental report which contains a considerable amount of irrelevant information. The key elements of an experimental report are included, (i.e. there is an introduction, a procedure, data, a conclusion and an evaluation). To improve:
1) The introduction contains some good summaries of transport mechanism and description of the cell membrane, but it also contains a significant amount of irrelevant information that should be removed.
2)The information in the introduction should be clearly linked to the experiment and its relevance highlighted.
3)The procedure is clear, but would benefit from some brief explanation of the steps taken
4)The table and graph are good but standard deviation error bars should be included
5)The results discussion should include manipulation of data for each phase of the graph.
6)The results obtained should be explained clearly using the relevant biological theory
7)The evaluation should discuss the accuracy and validity of the results obtained in terms of sources of error. Currently the evaluation is just a list of 'things done well'. The standard deviation should be discussed in terms of the reliability of the results, and any anomalies should be identified
The procedure is clear, but lacks any explanation of the steps taken. The disc