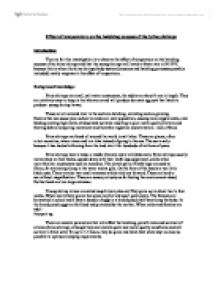 Effect of temperature on the hatching success of the brine shrimps

Effect of temperature on the hatching success of the brine shrimps Introduction: The aim for this investigation is to observe the effect of temperature on the hatching success of the brine shrimps and that the young shrimps will hatch at faster rate in 20-25�C because this is where the brine shrimps body system (enzymes and hatching processes possibly included) mostly response to the effect of temperature. Background knowledge: Brine shrimps are small, salt water crustaceans; the adults are about 8 mm in length. They are relatively easy to keep in the laboratory and will produce dormant egg cyst that hatch to produce young shrimp larvae. These are all covered later in the sections hatching, enriching and on-growing. Factors that can cause your culture to crash are: over population, causing low oxygen levels, over feeding creating high levels of dissolved nutrients resulting in poor water quality, bottom and floating debris hampering movement and therefore ingestion and starvation-lack of food. Brine shrimps are found all around the world in salt lakes. These are places, often in hot countries, where rivers end in a lake instead of going to the sea. The sea is salty because it has had salts flowing from the land into it for hundreds of millions of years. Brine shrimps have a head, a middle (thorax) and a tail (abdomen). Brine shrimps usually move about on their backs, upside down with their leafy-legs uppermost, unlike other more familiar crustaceans such as woodlice. ...read more.

0 0 0 20 0 0 1 2 3 25 0 1 3 3 7 30 1 0 0 0 1 Bar Chart 1: A bar chart to show how many number of eggs hatched at each temperature tested. Analysis: From the bar chart results, we can see that most of the brine shrimps' eggs cyst hatched at 25�C where as I have predicted was going to be somewhere in this temperature to be most responsive, primarily because this is the optimum temperature where the brine shrimps survives the most especially during hatching and grow best when kept as close as possible to optimum keeping requirements. Obviously, even though the result of survival rate were small it is undeniable that at 20�C, there were at least 3 brine shrimps that survived which can be considered as part of the optimum estimation temperature and therefore shows possibility of survival rates for the hatched egg cyst. At 5�C, there were no results obtained, therefore this says that the development of the egg cyst at this temperature might not be the best condition because it is too low for metabolic processes that the egg will go through Amazingly enough even though the results were taken form the "mean"/ average number of eggs hatched after two days within the 4 groups of students who did the experiment in the class, there were obvious results that it did not worked not only once but throughout this temperature chosen, therefore this means that certainly no overall results will be gained. ...read more.

For example if we got a high number of shrimps that had hatched and then in one of the trials we see that there is not any that had hatched, then this will be anomalous. We could blame this on systematic errors. As I have mentioned before we may only have 40 shrimps. If we exceed this number then we might find that there are errors due to that the space occupied by each shrimp egg is too small. Another error is that we do not know that the room temperature is constant and if we left it over a couple of days we may have found that the temperature at night may not necessarily be the same as it was in the day before. However, there is always room fro improvements. For an example: ? Repeat the investigation ate last 3 times more for each group to gain a wider results ensuring that is replicated with same method used at same standard conditions. ? Consider the following: ? Whether that the temperature water baths that will be used for the experiment is enough for the brine shrimp to hatch as it is known to be a sub-topical species,therefore considerations might be needed, also the salinity of the water may varied that the hatching success may not possibly adapt to it compared with natural hatching in the sea water, so changes in mass of salt can be considered too. ...read more.